During a live reptile show, volunteers from the audience are requested to assist in the handling of a 5-meter-long (approx. 16-foot) female Burmese python.

Reptilia is Canada's largest indoor reptile zoo, with 25,000 square feet (2,300 m2) of indoor exhibits featuring over 250 reptiles, amphibians and arachnids. It is accredited by CAZA.

Currently there are two Ontario locations, one in Vaughan and one in Whitby. 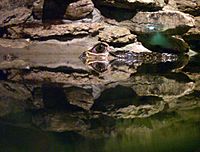 Participants learn how alligators and crocodiles hide themselves in the water. Here we see the small above-water portion of the reptile well camouflaged, though also reflected in the water.

About 250 species of reptiles are in the zoo's collection. Among them is Canada's largest crocodile, a 4-metre (13 ft), 1,000-pound (450 kg) Nile crocodile named Induna. The zoo also contains a 14-foot-long (4.3 m) king cobra, 20-foot-long (6.1 m) pythons, anacondas, poison dart frogs, rattlesnakes, and more. About 75% of animals are rescues, with the remainder either born on location or acquired from other accredited facilities. Of the rescues, many are obtained from previous owners who cannot cope with animals that have achieved their adult size, for which the zoo receives "constant calls". The zoo takes in about 75 such animals every year, many of which are later sent to other facilities.

Each location has a theatre area in which the zoo exhibits interactive reptile shows.

Reptilia provides curriculum compliant educational programs from kindergarten to grade 12 along with specialized post secondary programs for first responders, educators, animal control officers and veterinarians. Educational programs are provided at Reptilia, as well as through the transportation of reptiles to various schools to provide lessons in school classrooms. Lessons are typically of 1 hour duration.

Reptilia interacts closely with other educational organizations, supplying reptiles and other supplies to the Ontario Science Centre, helping the Toronto Zoo with their educational programs, and working with many of the schools in the Greater Toronto Area. Reptilia also has a number of classrooms and party rooms that can be rented out for activities such as birthday parties. Each room is named after a different reptile.

All content from Kiddle encyclopedia articles (including the article images and facts) can be freely used under Attribution-ShareAlike license, unless stated otherwise. Cite this article:
Reptilia (zoo) Facts for Kids. Kiddle Encyclopedia.