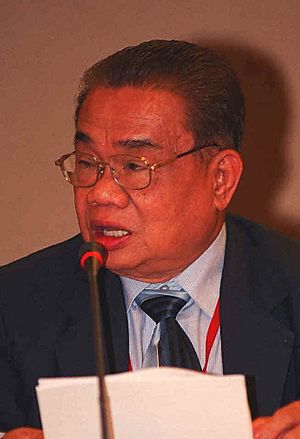 Resurreccion Borra (October 20, 1935 – August 1, 2020) was a Filipino public servant. He worked as a Career Executive Service Officer (CESO). He also was a commissioner and was the Acting Chairman of the Philippine Commission on Elections. During his term, he became known for forcing strict rules on impeachment. He also tried to fight against bribery in mayoral races in Manila. He was also critical of the use of modern election machines in the Philippines.

He was nominated to the job by then President Gloria Macapagal Arroyo to be COMELEC Commissioner in 2001. He was also nominated by her in 2007 to be Chairman of the Commission on Elections. His nomination was seen as a surprising move after the sudden resignation of former Benjamin Abalos.

He was the most senior Commissioner of COMELEC. He retired in 2008.

In 2003, an investigation and call for him to be criminally charged happened after it was found that he favored some election machine companies over others due to bribes.

Borra was born in Janiuay, Iloilo, Philippine Islands. He died on August 1, 2020 in Manila at the age of 84.

All content from Kiddle encyclopedia articles (including the article images and facts) can be freely used under Attribution-ShareAlike license, unless stated otherwise. Cite this article:
Resurreccion Borra Facts for Kids. Kiddle Encyclopedia.