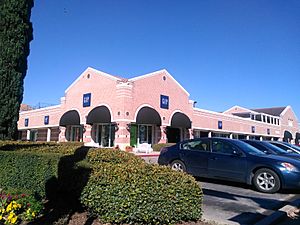 Rice Village is a collection of shops, restaurants and pubs, situated about a half-mile west of the center of Rice University's 300-acre (1.2 km2) campus. The core "Rice Village" extends over ten city blocks, defined by University Boulevard, Kirby Drive, Rice Boulevard, and Morningside Drive, though spillover has expanded the retail area to a total of sixteen blocks, including northward extensions along Kirby and into the present mixed-use blocks between Morningside and Greenbriar.

Rice Village has been one of Houston's oldest shopping destinations since the 1930s. It is an unplanned, high density hodge-podge of old and new retail store.

David Kaplan of Cite wrote that during the 1950s and 1960s Rice Village "filled up and prospered" but the economic boom in Greater Houston in the 1970s caused development to come elsewhere. He credited the influx of young families in Southgate and Southampton in Houston and the City of West University Place, beginning in the 1980s, to revitalizing Rice Village.

In the mid-1980s Rice University began buying land in the Rice Village area. Scott Wise, the university's vice president for investments, stated in 1996 that Rice Village is "strategically located" and allows possible growth and flexibility.

The first minutes of the 1994 film The Chase were filmed in the Rice Village.

The Village is host to dozens of restaurants. Along with traditional eateries there are restaurants specializing in food from all over the world. Rice Village has three French, two Japanese, two Chinese, two Italian, two Turkish, one Mexican, two Spanish, one Mediterranean, one Vietnamese, two Indian, and three Thai restaurants as well as sandwich shops, delicatessens, and speciality food and beverage stores. It also used to contain Houston's only beer brewpub.

All content from Kiddle encyclopedia articles (including the article images and facts) can be freely used under Attribution-ShareAlike license, unless stated otherwise. Cite this article:
Rice Village Facts for Kids. Kiddle Encyclopedia.