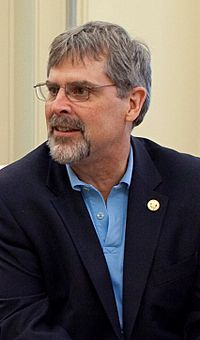 Richard Phillips (born May 16, 1955) is a American merchant mariner and author. He served as captain of the MV Maersk Alabama during its hijacking by Somali pirates in April 2009. He was played by Tom Hanks in the 2013 movie Captain Phillips.

Phillips was born in Winchester, Massachusetts. He was raised in Vermont.

All content from Kiddle encyclopedia articles (including the article images and facts) can be freely used under Attribution-ShareAlike license, unless stated otherwise. Cite this article:
Richard Phillips Facts for Kids. Kiddle Encyclopedia.