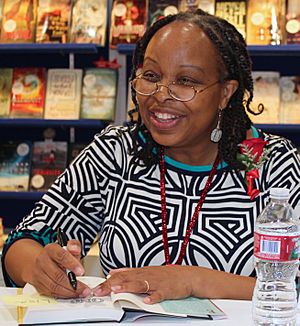 Rita Williams-Garcia is an American author. She was born on April 13, 1957 in Queens, New York. She has written many award-winning novels. They include Blue Tights, Fast Talk on a Slow Track, Like Sisters on the Homefront, Diamond Land, Jumped, No Laughter Here, Catching the Wild Waiyuuzee, One Crazy Summer, and Every Time a Rainbow Dies. Her works have won five selections and citations (ALA, Notable Books for Children and Adults citation, Booklist Editors’ Choice selection, Coretta Scott King Honor Book selection).

Williams-Garcia's family traveled before they settled in Seaside, California. Her father was in the army. People often made racist remarks to her when she was a child. She has spoken about it in her books and in interviews.

When they lived in Queens, New York Rita and her siblings weren't allowed to play outside so she entertained herself by writing short stories. She sold her first one when she was 14.

Williams-Garcia attended Hofstra University. She paused her writing career to major in economics and pursue her dreams in performing arts.

After college, she wrote her first book, Blue Tights.

It was repeatedly sent back to her, so Rita stopped writing and took time to have her children. Finally, Blue Tights was published and won awards. Williams-Garcia wrote more books.

She taught for many years at Vermont College of Fine Arts.

She lives in Jamaica, New York.

Rita has a brother and a sister (Rosalind).

She has two grown up daughters, Michelle and Stephanie.

She enjoys knitting, dancing and boxing.

All content from Kiddle encyclopedia articles (including the article images and facts) can be freely used under Attribution-ShareAlike license, unless stated otherwise. Cite this article:
Rita Williams-Garcia Facts for Kids. Kiddle Encyclopedia.