River King Mine Train is a steel mine train roller coaster at Six Flags St. Louis in Eureka, Missouri. Built in 1971, it was the first coaster of the park and opened with the park on June 5, 1971. The actual ride itself is one of two tracks, one which was later sold. Today, the ride operates with its original name. The ride has also received modern upgrades, including a new control panel. It is a popular family and beginner coaster being it is the smallest in the park. The Mine Train as it is often called, is unique in the fact that it has no automatic system for the lap bars. Instead, employees have to manually lock and unlock the bars. Trains are 5 cars with riders arranged 2 across in 3 rows. In total, the coaster has 3 trains that have a total capacity of 90 riders (30 each).

In 1971, Six Flags St. Louis along with Arrow Dynamics, built the park's first coaster. One year after it was installed, the name was changed to the River King Run-Away Mine Train. During the 1984 season, major alterations were made to the ride including the addition of stand up cars, paint detail and changes to the track. In addition, the roller coaster was renamed the Rail Blazer. Due to a death the same year on it, the modifications were undone and its first name returned. Eventually, a modern control panel was put in. Also, the trains received a divider between seats.

The River King Mine Train was named for the River King Coal Mine in the southeastern St. Louis exurb of Freeburg, Illinois. The 2,000-acre mine site was operated by Peabody Coal (now named Peabody Energy) from 1957 to 1989. After the closure of the large mine in 1989, Peabody donated some 1,800 acres of the 2,000-acre site to the Illinois Department of Natural Resources in 1994. The site is now the state owned and managed Peabody-River King State Fish and Wildlife Area and is open to the public for use by anglers, hunters, and other outdoor enthusiasts for recreational opportunities in the southeastern portion of Greater St. Louis.

When the River King Mine Train was built, it had two tracks. In 1988, it was sold to Dollywood where it was renamed Thunder Express and later moved to Magic Springs and Crystal Falls as Big Bad John where it still operates with modifications. The second track was removed after the Ninja came in from Vancouver. This track was not outfitted with the modifications that the other track received. 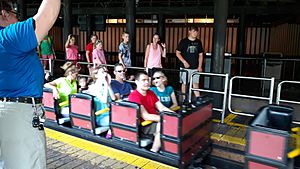 All content from Kiddle encyclopedia articles (including the article images and facts) can be freely used under Attribution-ShareAlike license, unless stated otherwise. Cite this article:
River King Mine Train Facts for Kids. Kiddle Encyclopedia.