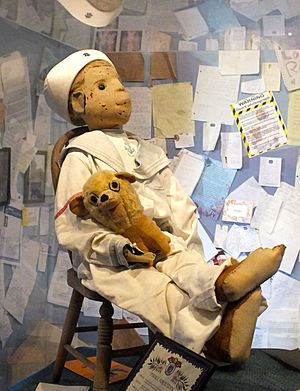 Robert the Doll is an allegedly haunted doll exhibited at the East Martello Museum. Robert was once owned by Key West, Florida, painter and author Robert Eugene Otto.

The doll originally belonged to Robert Eugene Otto, an artist described as "eccentric," who belonged to a prominent Key West family. The doll was reportedly manufactured by the Steiff Company of Germany, purchased by Otto's grandfather while on a trip to Germany in 1904, and given to young Otto as a birthday gift. The doll's sailor suit was likely an outfit that Otto wore as a child.

The doll remained stored in the Otto family home at 534 Eaton Street in Key West while Otto studied art in New York and Paris. Otto married Annette Parker in Paris on May 3, 1930. The couple returned to the Otto family home in Key West to live there until Otto died in 1974. His wife died two years later. After their deaths, the Eaton Street home containing the doll was sold to Myrtle Reuter, who owned it for 20 years until the property was sold to the current owners, who operate it as a guest house.

In 1994, the doll was donated to the East Martello Museum in Key West, Florida, where it eventually became a popular tourist attraction. It is annually rotated to the Old Post Office and Customhouse in October.

According to legend, the doll has supernatural abilities that allow it to move, change its facial expressions, and make giggling sounds. Some versions of the legend claim that a young girl of "Bahamian descent" gave Otto the doll as a gift or as "retaliation for a wrongdoing". Other stories claim that the doll moved voodoo figurines around the room, and was "aware of what went on around him". Still other legends claim that the doll "vanished" after Otto's house changed ownership a number of times after his death, or that young Otto triggered the doll's supernatural powers by blaming his childhood mishaps on the doll. According to local folklore, the doll has caused "car accidents, broken bones, job loss, divorce and a cornucopia of other misfortunes", and museum visitors supposedly experience "post-visit misfortunes" for "failing to respect Robert".

All content from Kiddle encyclopedia articles (including the article images and facts) can be freely used under Attribution-ShareAlike license, unless stated otherwise. Cite this article:
Robert (doll) Facts for Kids. Kiddle Encyclopedia.