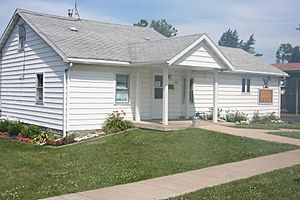 The Rochelle Railroad Park is a city park located in Rochelle, Illinois where railfans can safely view and photograph trains. 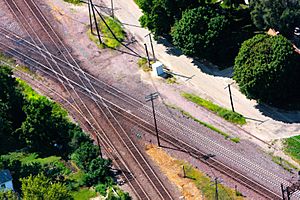 Rochelle's quad diamonds as seen from the air

The park is in the eastern quadrant of the diamond crossing between the Union Pacific Railroad (UP) and BNSF Railway (BNSF) mainlines between Chicago and points west. 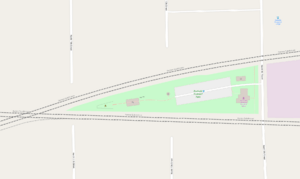 Map showing the layout of the park

The city chose the eastern quadrant of the crossing in which to build the park. Many factors went into the selection of the eastern quadrant, but by using it, the city was able to erect an elevated viewing platform with a gazebo-style roof, picnic tables, an area to build a re-creation of a hobo jungle, a display of strap rail track, a small preserved Whitcomb switching locomotive (manufactured by the Whitcomb Locomotive Works of Rochelle), and a paved parking lot. The amenities are further enhanced with public restrooms, vending machines, and a small model railroad shop.

Some of the more technical offerings at the park for railfans to enjoy include the following:

Indicators that a train is approaching the park include the following:

All content from Kiddle encyclopedia articles (including the article images and facts) can be freely used under Attribution-ShareAlike license, unless stated otherwise. Cite this article:
Rochelle Railroad Park Facts for Kids. Kiddle Encyclopedia.