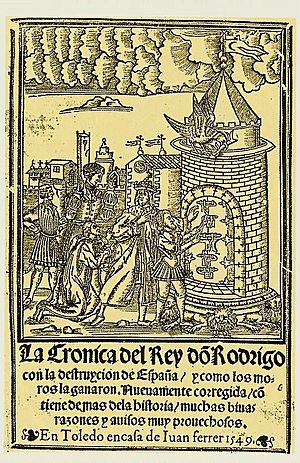 Rodrigo (English: Ruderic, Roderic, Roderik, Roderich, or Roderick, [لذريق] Error: {{Lang-xx}}: text has italic markup (help) ; died 711 or 712) was the Visigothic King of Hispania for a brief period between 710 and 712. He is famous in legend as "the last king of the Goths." In history he actually is an extremely obscure figure about whom little can be said with certainty but that he ruled part of Iberia with opponents ruling the rest and was defeated and killed by invading Muslims who soon conquered the entire peninsula. His widow Egilona is believed to have married Abd al-Aziz ibn Musa, who was later assassinated.

All content from Kiddle encyclopedia articles (including the article images and facts) can be freely used under Attribution-ShareAlike license, unless stated otherwise. Cite this article:
Rodrigo Facts for Kids. Kiddle Encyclopedia.