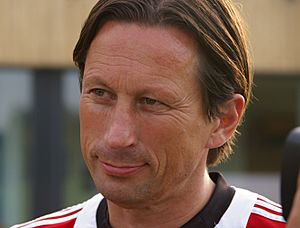 His original profession is engineer. As player he played for SC Verl and SC Paderborn as midfielder. He started his career as manager with Delbrücker SC, went on to Preußen Münster and then to Paderborn 07. Since his time with Münster he is a professional manager. 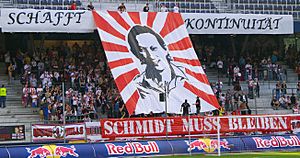 "Schmidt must stay"-Solidarity of the fan scene

His last manager job is with FC Red Bull Salzburg in the Bundesliga, the top level league in Austrian football. Although the team gained goal and point record they finished only second. Being in danger to lose his job a lot of the fans declared their solidarity.

All content from Kiddle encyclopedia articles (including the article images and facts) can be freely used under Attribution-ShareAlike license, unless stated otherwise. Cite this article:
Roger Schmidt Facts for Kids. Kiddle Encyclopedia.