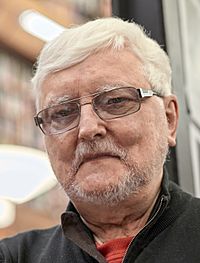 Gohs usually wrote his own stories as well. Early works such as Mannen från Claa (The Man from Claa) and Dödens Fågel (The Bird of Death) were well received.

He produced a comic book story about the legendary Children's Crusade directly for the Swedish Phantom comic book.

All content from Kiddle encyclopedia articles (including the article images and facts) can be freely used under Attribution-ShareAlike license, unless stated otherwise. Cite this article:
Rolf Gohs Facts for Kids. Kiddle Encyclopedia.