Roosevelt Island is a station on the IND 63rd Street Line of the New York City Subway . Located in Manhattan on Roosevelt Island in the East River , it is served by the F trains at all times and the <F> trains during rush hours in the peak direction . After this station , the next stations will be Lexington Avenue 63rd Street and 21st Street Queensbridge . 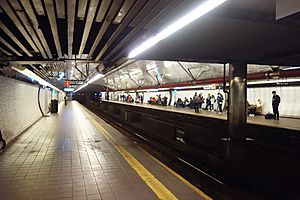 This station is for F trains.

There are two two tunnels .

There is one tunnel to Queens and another one to Manhattan .

But sometimes , E trains and other trains enter this station via 6th Avenue to World Trade Center or Jamaica Center or other stations .

All content from Kiddle encyclopedia articles (including the article images and facts) can be freely used under Attribution-ShareAlike license, unless stated otherwise. Cite this article:
Roosevelt Island station Facts for Kids. Kiddle Encyclopedia.