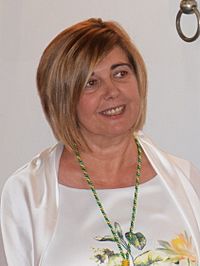 Maria Rosario Cordero Martin (13 August 1966 – 24 December 2020) was a Spanish politician. She was a member of the Spanish Socialist Workers' Party. Cordero was born in Cáceres, Spain. From 2015 until her death, she was President of the Province of Cáceres. From 2003 until her death, Cordero was Mayor of Romangordo.

All content from Kiddle encyclopedia articles (including the article images and facts) can be freely used under Attribution-ShareAlike license, unless stated otherwise. Cite this article:
Rosario Cordero Facts for Kids. Kiddle Encyclopedia.