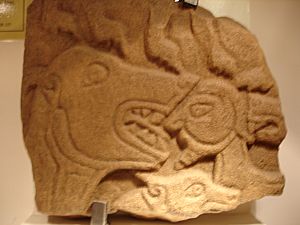 The Rosemarkie sculpture fragments are the Pictish slabs and stone fragments other than the main Rosemarkie Stone which have been discovered in Rosemarkie, on the Black Isle of Easter Ross. There are fourteen in all. Perhaps the most widely known is the so-called Daniel Stone. The latter is so named because of the tendency among scholars and enthusiasts of Pictish art to give every Pictish stone a Christian interpretation. In this case, the depiction of a man's head at the jaws of a wolf-like beast is supposed to depict the Old Testament story of Daniel in the Lion's Den. The stones are all of likely Christian origin, and share a similar style with the art of Iona. Some of them may have been of funerary purpose, as coffin lids, while others may have formed part of a larger stone. These stones are usually displayed in the Groam House Museum of Rosemarkie.

All content from Kiddle encyclopedia articles (including the article images and facts) can be freely used under Attribution-ShareAlike license, unless stated otherwise. Cite this article:
Rosemarkie sculpture fragments Facts for Kids. Kiddle Encyclopedia.