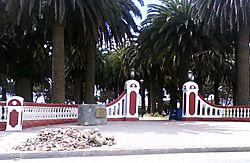 Agustín Ross Park is a park in Agustín Ross Avenue, in front of the old Ross Casino, in Pichilemu. It is a National Monument of Chile.

The original park boasts 100-year-old native Chilean palms (Phoenix canariensis) and many green spaces, and its recent restoration has made it into an attractive walking destination. The majority of the grand houses in the park are in use as private homes.

Both the park and the former casino were named National Monuments on February 25, 1988.

The Park was severely damaged after the 2010 Pichilemu earthquake, destroying all the balaustrades around the park.es:Pichilemu#Casino y Parque Ross

All content from Kiddle encyclopedia articles (including the article images and facts) can be freely used under Attribution-ShareAlike license, unless stated otherwise. Cite this article:
Agustín Ross Park Facts for Kids. Kiddle Encyclopedia.