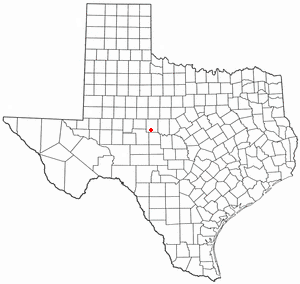 Rowena is an unincorporated community in southwestern Runnels County, Texas, United States. According to the US Census, the population was estimated at 483 in 2000, an increase of 3% from the 1990 census (466 Rowenans). The United States Postal Service now estimates the population at 714. The elevation is 1,628 feet above sea level.

All content from Kiddle encyclopedia articles (including the article images and facts) can be freely used under Attribution-ShareAlike license, unless stated otherwise. Cite this article:
Rowena, Texas Facts for Kids. Kiddle Encyclopedia.