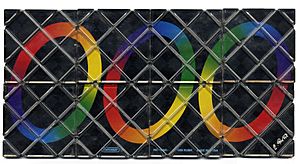 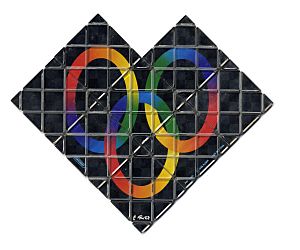 Rubik's Magic, like Rubik's Cube, is a mechanical puzzle invented by Ernő Rubik and first manufactured by Matchbox in the mid-1980s.

The puzzle consists of eight black square tiles (changed to red squares with goldish rings in 1997) arranged in a 2 × 4 rectangle; diagonal grooves on the tiles hold wires that connect them, allowing them to be folded onto each other and unfolded again in two perpendicular directions (assuming that no other connections restrict the movement) in a manner similar to a Jacob's Ladder toy. The front side of the puzzle shows, in the initial state, three separate, rainbow-coloured rings; the back side consists of a scrambled picture of three interconnected rings. The goal of the game is to fold the puzzle into a heart-like shape and unscramble the picture on the back side, thus interconnecting the rings.

Numerous ways to accomplish this exist, and experienced players can transform the puzzle from its initial into the solved state in less than 2 seconds. Other challenges for Rubik's Magic include reproducing given shapes (which are often three-dimensional), sometimes with certain tiles required to be in certain positions and/or orientations.

It can be seen that the total number of 2 × 4 rectangles that can possibly be created using Rubik's Magic is only thirty-two; these can be created from eight distinct chains. The easiest way to classify chains is by the means of the middle tile of the puzzle's finished form (the only tile that has segments of all three rings) and the tile next to it featuring a yellow/orange ring segment (the indicator tile).

Every chain either has the middle tile on the outside (O) or the inside (I) of the chain; if it is arranged so that the indicator tile is to the right of the middle tile, then the position of the ring segment on the indicator tile can either be the upper left (UL), upper right (UR), lower left (LL), or lower right (LR) corner. The position and orientation of the remaining tiles are then determined by the middle and indicator tiles, and eight distinct chains (OUL to ILR) are obtained, although the naming convention is not standardized.

Similarly, the 2 × 4 rectangle forms of them can be categorized. Each of these forms has exactly one chain associated with it, and each chain yields four different rectangle forms, depending on the position of the edge where it is folded with regard to the middle tile. By concatenating one of the numbers 0, 1, 2, or 3 to the chain's name, depending on whether the number of tiles to the right of the middle tile before the folding edge, a categorization of the rectangle forms is obtained. The starting position, for example, is rectangle form OUR2. The cube now is rainbow and has silver rings. A game rule for this one is you can match the silver rings and color squares, which can make it more complicated. A similar classification can also be obtained for the heart-shaped forms of the puzzle, of which 64 exist. 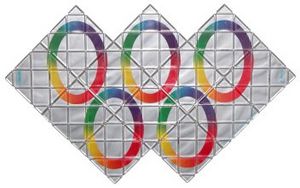 Rubik's Magic: Master Edition (most commonly known as Master Magic) was manufactured by Matchbox in 1987. It is a modification from the Rubik's Magic, with 12 tiles instead of the original's 8. The puzzle has 12 panels interconnected with nylon wires in a 2 × 6 rectangular shape, measuring approximately 4.25 inches (10.5 cm) by 13 inches (32 cm). The goal of the game is the same as for Rubik's Magic, which is to fold the puzzle from a 2 × 6 rectangular shape into a W-like shape with a certain tile arrangement. Initially, the front side shows a set of 5 linked rings. Once solved, the puzzle takes the shape of the letter W, and shows 5 unlinked rings on the back side of the previous initial state.

As a puzzle, the Master Edition is actually simpler than the original Rubik's Magic. With more hinges, the player can work on one part, mostly ignoring the other parts. The minimal solution involves 16 quarter-turn moves. There are multiple solutions. The puzzle was an official World Cube Association (WCA) event from 2003-2012.

All content from Kiddle encyclopedia articles (including the article images and facts) can be freely used under Attribution-ShareAlike license, unless stated otherwise. Cite this article:
Rubik's Magic Facts for Kids. Kiddle Encyclopedia.