Ernő Rubik ( born 13 July 1944) is a Hungarian inventor, architect and professor of architecture. He is best known for the invention of mechanical puzzles including the Rubik's Cube (1974), Rubik's Magic, Rubik's Magic: Master Edition, and Rubik's Snake.

While Rubik became famous for inventing the Rubik's Cube and his other puzzles, much of his recent work involves the promotion of science in education. Rubik is involved with several organizations such as Beyond Rubik's Cube, the Rubik Learning Initiative and the Judit Polgar Foundation all of whose aim is to engage students in science, mathematics, and problem solving at a young age.

Ernő Rubik was born in Budapest, Kingdom of Hungary, 13 July 1944, during World War II, and has lived all his life in Hungary. His father, Ernő Rubik Sr., was a flight engineer at the Esztergom aircraft factory, and his mother, Magdolna Szántó, was a poet. He has stated in almost every interview that he got his inspiration from his father.

His father, Ernő Sr., was a highly respected engineer of gliders. His extensive work and expertise in this area gained him an international reputation as an expert in his field. Ernő Rubik has stated that:

Beside him I learned a lot about work in the sense of a value-creating process which has a target, and a positive result too. Both figuratively and literally he was a person capable of 'moving a hill'. There was nothing that could prevent him from doing what he decided or bringing a project to a completion, if necessary even with his own hands. No work was unworthy or undeserving for him.

Rubik studied sculpture at the Technical University in Budapest and architecture at the Academy of Applied Arts and Design, also in Budapest. While a professor of design at the academy, he pursued his hobby of building geometric models. One of these was a prototype of his cube, made of 27 wooden blocks; it took Rubik a month to solve the problem of the cube. It proved a useful tool for teaching algebraic group theory, and in late 1977 Konsumex, Hungary's state trading company, began marketing it. By 1980 Rubik's Cube was marketed throughout the world, and over 100 million authorized units, with an estimated 50 million unauthorized imitations, were sold, mostly during its subsequent three years of popularity. Approximately 50 books were published describing how to solve the puzzle of Rubik's Cube. Following his cube's popularity, Rubik opened a studio to develop designs in 1984; among its products was another popular puzzle toy, Rubik's Magic.

Rubik considers university and the education it afforded him as the decisive event which shaped his life. Rubik has stated that "Schools offered me the opportunity to acquire knowledge of subjects or rather crafts that need a lot of practice, persistence and diligence with the direction of a mentor."

From 1971 to 1979, Rubik was a professor of architecture at the Budapest College of Applied Arts (Iparművészeti Főiskola). It was during his time there that he built designs for a three-dimensional puzzle and completed the first working prototype of the Rubik's Cube in 1974, applying for a patent on the puzzle in 1975. In an interview with CNN, Rubik stated that he was "searching to find a good task for my students."

Space always intrigued me, with its incredibly rich possibilities, space alteration by (architectural) objects, objects' transformation in space (sculpture, design), movement in space and in time, their correlation, their repercussion on mankind, the relation between man and space, the object and time. I think the CUBE arose from this interest, from this search for expression and for this always more increased acuteness of these thoughts... 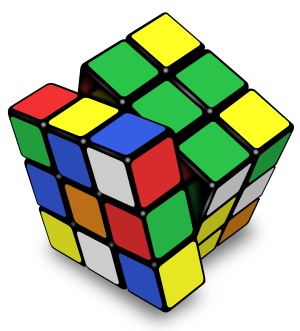 From classroom tool to Magic Cube to Rubik's Cube

Starting with blocks of wood and rubber bands, Rubik set out to create a structure which would allow the individual pieces to move without the whole structure falling apart. Rubik originally used wood for the block because of the convenience of a workshop at the university and because he viewed wood as a simple material to work with that did not require sophisticated machinery. Rubik made the original prototypes of his cube by hand, cutting the wood, boring the holes and using elastic bands to hold the contraption together.

Rubik showed his prototype to his class and his students liked it very much. Rubik realized that, because of the cube's simple structure, it could be manufactured relatively easily and might have appeal to a larger audience. Rubik's father possessed several patents, so Rubik was familiar with the process and applied for a patent for his invention. Rubik then set out to find a manufacturer in Hungary, but had great difficulty due to the rigid planned economy of Hungary at the time. Eventually, Rubik was able to find a small company that worked with plastic and made chess pieces. The cube was originally known in Hungary as the 'Magic Cube'.

Rubik licensed the Magic Cube to Ideal Toys, a US company in 1979. Ideal rebranded The Magic Cube to the Rubik's Cube before its introduction to an international audience in 1980. The process from early prototype to significant mass production of the Cube had taken over six years. The Rubik's Cube would go on to become an instant success worldwide, winning several Toy of the Year awards, and becoming a staple of 1980's popular culture. To date, over 350 million Rubik's Cubes have been sold, making it one of the best selling toys of all time.

In addition to Rubik's Cube, Rubik is also the inventor of Rubik's Magic, Rubik's Snake and Rubik's 360 among others.

Later career and other works

In the early 1980s, he became the editor of a game and puzzle journal called ..És játék (...And games), then became self-employed in 1983, founding the Rubik Stúdió, where he designed furniture and games. In 1987 he became a professor with full tenure; in 1990 he became the president of the Hungarian Engineering Academy (Magyar Mérnöki Akadémia). At the Academy, he created the International Rubik Foundation to support especially talented young engineers and industrial designers.

In 2009, he was appointed as an honorary professor of Keimyung University, Daegu, South Korea.

Work and engagements in the 2010s

In the 2010s, Rubik has recently spent much of his time working on Beyond Rubik's Cube, a Science, Technology, Engineering, Mathematics (STEM fields) based exhibition, which would travel the globe over the next six years. The grand opening of the exhibit was held on 26 April 2014 at the Liberty Science Center in New Jersey. At the exhibition, Rubik gave several lectures, tours, and engaged with the public and several members of the speedcubing crowd in attendance, including Anthony Michael Brooks, a world-class speedcuber.

Ernő Rubik has listed several individuals who, as he has said, "exerted a great influence over me through their work." These include Leonardo da Vinci, whom Rubik regards as the Renaissance man; Michelangelo, whom he respects as a polymath, painter, and sculptor; and artist M.C. Escher, who drew impossible constructions and grappled with explorations of infinity. As regards to philosophers and writers, Rubik admires Voltaire, Stendhal, Thomas Mann, Jean-Paul Sartre, Hungarian poet Attila József, Jules Verne, and Isaac Asimov. In the field of architecture, Rubik is an admirer of Frank Lloyd Wright and Le Corbusier.

Rubik admits to being a lifelong bibliophile and has stated, "Books offered me the possibility of gaining knowledge of the world, nature and people." Rubik has stated that he has a special interest in science fiction.

Rubik is fond of outdoor activities such as walking through nature, playing sports, and sailing on Lake Balaton. Rubik is also an avid gardener and has stated that "collecting succulents is my favourite pastime."

He attended the 2007 World Championship in Budapest. He also gave a lecture and autograph session at the "Bridges-Pecs" conference ("Bridges between Mathematics and the Arts") in July 2010.

Rubik is a member of the USA Science and Engineering Festival's Advisory Board.

All content from Kiddle encyclopedia articles (including the article images and facts) can be freely used under Attribution-ShareAlike license, unless stated otherwise. Cite this article:
Ernő Rubik Facts for Kids. Kiddle Encyclopedia.