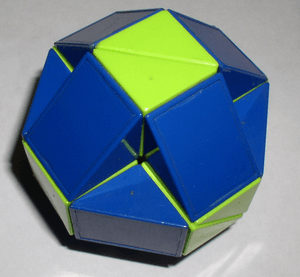 Snake in a ball solution as initially shipped 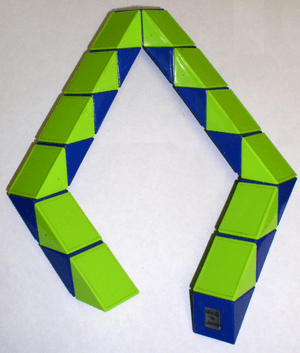 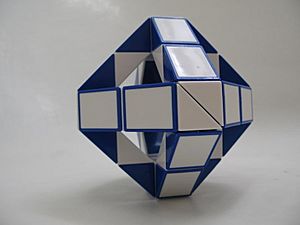 A Rubik's Snake (also Rubik's Twist, Rubik's Transformable Snake, Rubik’s Snake Puzzle) is a toy with 24 wedges that are right isosceles triangular prisms. The wedges are connected by spring bolts, so that they can be twisted, but not separated. By being twisted, the Rubik's Snake can be made to resemble a wide variety of objects, animals, or geometric shapes. Its "ball" shape in its packaging is a non-uniform concave rhombicuboctahedron.

The snake was invented by Ernő Rubik, better known as the inventor of the Rubik's Cube.

Rubik's Snake was released during 1981 at the height of the Rubik's Cube craze. According to Ernő Rubik: "The snake is not a problem to be solved; it offers infinite possibilities of combination. It is a tool to test out ideas of shape in space. Speaking theoretically, the number of the snake's combinations is limited. But speaking practically, that number is limitless, and a lifetime is not sufficient to realize all of its possibilities."

The 24 prisms are aligned in row with an alternating orientation (normal and upside down). Each prism can adopt 4 different positions, each with an offset of 90°. Usually the prisms have alternating colors.

The steps needed to make an arbitrary shape or figure can be described in a number of ways.

One common starting configuration is a straight bar with alternating upper and lower prisms, with the rectangular faces facing up and down, and the triangular faces facing towards the player. The 12 lower prisms are numbered 1 through 12 starting from the left, with the left and the right sloping faces of these prisms are labeled L and R respectively. The last of the upper prisms is on the right, so the L face of prism 1 does not have an adjacent prism.

Using these rules, a twist can be simply described as:

The position of the 23 turning areas can also be written directly after each other. Here the positions 0, 1, 2 and 3 are always based on the degrees of twist between the right-hand prisms relative to the left-hand prism, when viewed from the right of the axis of rotation. However, this notation is impractical for human readers, because it is difficult to determine the order of the twists.

All content from Kiddle encyclopedia articles (including the article images and facts) can be freely used under Attribution-ShareAlike license, unless stated otherwise. Cite this article:
Rubik's Snake Facts for Kids. Kiddle Encyclopedia.