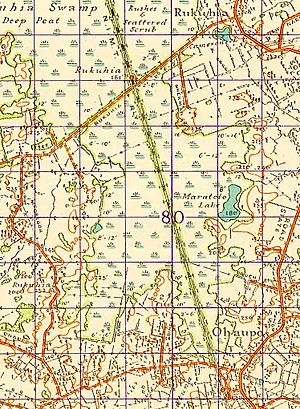 1946 one inch to one mile map (Source- Land Information New Zealand (LINZ) and licensed by LINZ for re-use under the Creative Commons Attribution 3.0 New Zealand licence)

Rukuhia railway station was a flag station on the North Island Main Trunk in New Zealand, located in the settlement of Rukuhia. It was established during an extension of the railway line in the 1870s. The service started with two trains a day.

Opening of the line from Hamilton to Ōhaupō was delayed by subsidence at Rukuhia. A service had been planned from 25 February 1878 and the Governor General went over the line on 27 March 1878, but opening was still postponed as large quantities of gravel were poured into a hole. The line finally opened on 4 June 1878. A 1943 notice noted that owing to the danger of track subsidence, no engine must be allowed to remain stationary on the siding for any length of time. Tests in 1981 found that the track deformed by about 12mm each time a train went over it, due to the peat swamp.

On 12 September 1971 Rukuhia closed to all traffic and only a passing loop remains.

All content from Kiddle encyclopedia articles (including the article images and facts) can be freely used under Attribution-ShareAlike license, unless stated otherwise. Cite this article:
Rukuhia railway station Facts for Kids. Kiddle Encyclopedia.