Saint-Lin–Laurentides is a small city located in the Montcalm Regional County Municipality of Quebec, Canada. Its official name uses an en dash; however, the city's own website uses the two-hyphen version of its name: Saint-Lin-Laurentides. In the Canada 2011 Census its population was 17,463.

Saint-Lin was the birthplace of former Canadian Prime Minister Wilfrid Laurier, whose paternal home is now a National Historic Site of Canada.

Saint-Lin–Laurentides was formed on 1 March 2000, when the Municipality of Saint-Lin and the Town of Laurentides were merged.

Saint-Lin was first settled in 1807 when pioneers from Saint-Pierre-du-Portage (now L'Assomption) arrived. In 1828, the Saint-Lin-de-Lachenaie Parish was founded. In 1845, the Parish Municipality of Saint-Lin was established, but was abolished 2 years later in 1847 when it was absorbed into the county municipality. That same year, its post office opened. In 1855, the municipality was reestablished as Saint-Lin-de-Lachenaye, with Carolus Laurier, father of Sir Wilfrid Laurier, as first mayor.

Laurentides was originally the Village Municipality of Saint-Lin, which became an incorporate entity in 1856. In 1883, it changed name and statutes and became the Town of Laurentides. Also that year, the local post office opened. 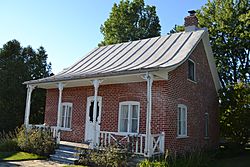 All content from Kiddle encyclopedia articles (including the article images and facts) can be freely used under Attribution-ShareAlike license, unless stated otherwise. Cite this article:
Saint-Lin–Laurentides Facts for Kids. Kiddle Encyclopedia.