The Saint Rita Apartments is an apartment building located at 35 Owen Street in the North End, of Detroit, Michigan. It was listed on the National Register of Historic Places in 2017. 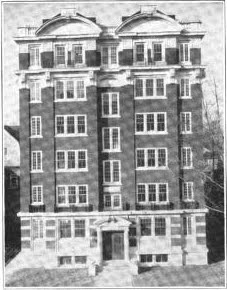 The Saint Rita Apartments is a six-story English Renaissance Revival red brick apartment building. The exterior has extensive terra cotta detail work. The terra cotta ornamentation is most noticeable at the roofline.

On the interior, the lobby features ornate plaster detail and complex designs, including a portrait of two dancers and the name "SAINT RITA" above the entrance. When constructed, the Saint Rita contained 24 apartments of four or five room each.

The Saint Rita Apartments were constructed in 1916. When constructed, the building contained 24 luxury apartments. The building was designed by Harry Stevensen and owned by Robert S. Brown.

By 1990, the apartment building had been converted into subsidized housing. The building closed in 2005, and shortly thereafter a fire damaged the interior. In 2008, it was placed on the demolition list by the city. In 2011 it was sold at auction.

All content from Kiddle encyclopedia articles (including the article images and facts) can be freely used under Attribution-ShareAlike license, unless stated otherwise. Cite this article:
Saint Rita Apartments Facts for Kids. Kiddle Encyclopedia.