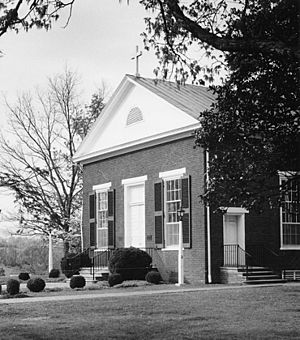 Saint Stephen's Episcopal Church is a historic Episcopal church that was founded in 1824 by Nicholas Hamner Cobbs and is located at Forest, Bedford County, Virginia. The Church sits on a historical plot which was originally owned by former president Thomas Jefferson. Saint Stephens was listed on the National Register of Historic Places in 1985.

Nicholas Hamner Cobbs grew up in the Bedford area and was raised in a good home, his mother a devout Christian unlike his father. With his devotion to studying, and teaching locally by the age of seventeen, Cobbs was regarded as a hard-working and faithful man. Cobbs was also the principal for the New London Academy between October 19, 1824 and September 28, 1830.

The first building was completed in 1825 on part of the Poplar Forest tract, which was previously owned by former President Thomas Jefferson and later given to his eldest daughter Martha Jefferson Randolph for her dowry in 1790. The land was then sold to Elizabeth Moseley Radford before being donated to the church where the original building was torn down and the present one stands today.

In the same year, William Radford and Elizabeth Moseley Radford deeded additional land to enlarge the church property and provide a cemetery for members. The cemetery is still in use today.

in March of 1898, a bad wind storm damaged the church threatening to indefinitely close the church. The south gable had fallen in which compromised the structure. Fortunately it was repaired with both the help of the congregation and the community.

A lack of funds to make necessary repairs closed the church temporarily in 1911, although occasional services were held.

1941, at the instigation of Malcolm Griffin, the church was restored and reopened. Since that date, services have been held continuously. A 2004 renovation project expanded the choir area and enlarged the front area where preaching occurs.

It was listed on the National Register of Historic Places in 1985. The associated Old Rectory was listed in 1973.

The church has retained much of the original furnishings, including the pews, the altar rail and the Bishop's chair. All the doors and windows are original. In 1897, the gallery at the back of the church was removed, but the side door entrance remains. In the same year, the wooden ceiling and a recessed chancel were added. It is believed that the marble baptismal font was installed during this period, since the pedestal bears the label of Lynchburg Marble Works which was in business from 1879-1883.

When the church reopened in the 1940s, the present altar, the Priest's and Bishop's chairs (designed by local artisans Julian and George Lindsey), and the altar cross and prayer stand were given as memorials. The Tiffany stained glass window above the altar was given by a subscription raised by Ethel Dirom.

The Church is a one-storey, three-bay building and has a partial basement. It is covered in oversized brick and Greek Revival style trim, and has a low pitched roof with a wooden cross at the top. In total, the building measures 36 feet wide and 61 feet long.

All content from Kiddle encyclopedia articles (including the article images and facts) can be freely used under Attribution-ShareAlike license, unless stated otherwise. Cite this article:
Saint Stephen's Episcopal Church (Forest, Virginia) Facts for Kids. Kiddle Encyclopedia.