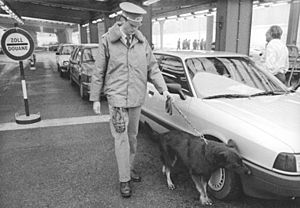 Border police looking for illegal drugs with a specially trained dog: If they check every tenth car, they are taking an unbiased sample.
For other uses, see Sampling.

In statistics a sample is part of a population. The sample is carefully chosen. It should represent the whole population fairly, without bias. The reason samples are needed is that populations may be so large that counting all the individuals may not be possible or practical.

Therefore, solving a problem in statistics usually starts with sampling. Sampling is about choosing which data to take for later analysis. As an example, suppose the pollution of a lake should be analysed for a study. Depending on where the samples of water were taken, the studies can have different results. As a general rule, samples need to be random. This means the chance or probability of selecting one individual is the same as the chance of selecting any other individual.

In practice, random samples are always taken by means of a well-defined procedure. A procedure is a set of rules, a sequence of steps written down on paper and followed to the letter. Even so, some bias may remain in the sample. Consider the problem of designing a sample to predict the result of an election poll. All known methods have their problems, and the results of an election are often different from predictions based on a sample. If you collect opinions by using telephones, or by meeting people in the street, the sample always has bias. Therefore, in cases like this a completely neutral sample is never possible. In such cases a statistician will think about how to measure the amount of bias, and there are ways to estimate this.

A similar situation occurs when scientists measure a physical property, say the weight of a piece of metal, or the speed of light. If we weigh an object with sensitive equipment we will get minutely different results. No system of measurement is ever perfect. We get a series of estimates, each one being a measurement. These are samples, with a certain degree of error. Statistics is designed to describe error, and carry out analysis on this kind of data.

There are different kinds of samples:

Another type of stratified sample deals with variation. Here larger samples are taken from the more variable sub-populations so that the summary statistics such as the means and standard deviations, are more reliable.

All content from Kiddle encyclopedia articles (including the article images and facts) can be freely used under Attribution-ShareAlike license, unless stated otherwise. Cite this article:
Sample Facts for Kids. Kiddle Encyclopedia.