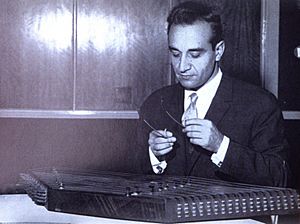 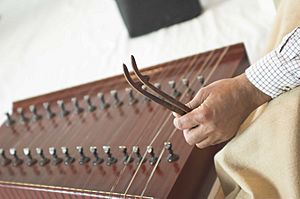 Santur (Persian: سنتور) is an Iranian traditional musical instrument. It can also be referred to as santoor or santour. It is usually based on 18 Bridge (Persian: خرک) on the left and right side (9 in left and 9 on the right).

Santoor has 4 strings in each bridge. It is commonly played with two wooden stick named (Persian: مضراب) which has strings usually either white and yellow.

The santur was invented and developed in the area of Iran and Mesopotamia (modern-day Iraq). From there, the instrument was traded and traveled to different parts of the Middle East.

Each country customized and designed its own versions to adapt to their musical scales and tunings. The original santur was made with tree bark and stones, and strung with goat intestines.

The Mesopotamian santur has been claimed to be the father of the harp, the Chinese yangqin, the harpsichord, the qanun, the cimbalom, and the American and European hammered dulcimers

All content from Kiddle encyclopedia articles (including the article images and facts) can be freely used under Attribution-ShareAlike license, unless stated otherwise. Cite this article:
Santur Facts for Kids. Kiddle Encyclopedia.