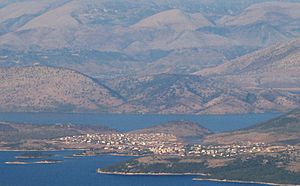 Sarandë District (Albanian: Rrethi i Sarandës) was one of the thirty-six districts of Albania (which were dissolved in 2000) that is now part of Vlorë County. The area of the district was 749 km². The population of the district was 48,474 (2010 estimate). According to the census of January 1993, it was 53,700. The centre of the district was the city of Sarandë. Other places included Konispol (at the border with Greece), Ksamil (a resort), Çukë, Vrinë and Butrint (an archeological site).

Alongside ethnic Albanians, there is a considerable ethnic Greek minority. As of 2002, less than 30% of the inhabitants of the district were Greeks.

All content from Kiddle encyclopedia articles (including the article images and facts) can be freely used under Attribution-ShareAlike license, unless stated otherwise. Cite this article:
Sarandë District Facts for Kids. Kiddle Encyclopedia.