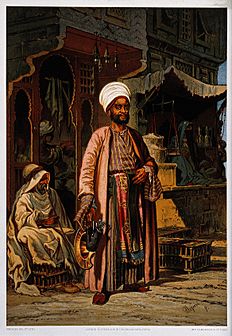 A satisfied customer stands by a drug store on a street in Cairo (1850), a chromolithograph by A. Preziosi. 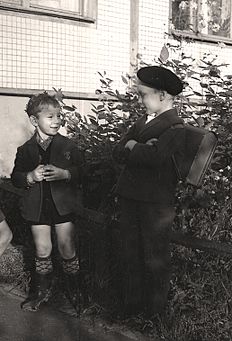 Envy and Self-satisfaction, 1965, a photograph by Vitold Muratov.

Satisfaction as an emotion

Satisfaction does not occur automatically. Satisfaction is the process of coping with life. Humans are in a constant fight against dissatisfaction. The Dalai Lama spoke about this:

"When you are discontent, you always want more, more, more. Your desire can never be satisfied. But when you practice contentment, you can say to yourself, "Oh yes—I already have everything that I really need."

If someone slips into total dissatisfaction, they might experience anguish. A person is more likely to be happy and satisfied if they learn how to control their negative experiences and to process positive thoughts. Usually, a person does not share their satisfaction with other people. That is called pride.

Psychologists say that life satisfaction and well-being are the two main ingredients of happiness.

All content from Kiddle encyclopedia articles (including the article images and facts) can be freely used under Attribution-ShareAlike license, unless stated otherwise. Cite this article:
Satisfaction Facts for Kids. Kiddle Encyclopedia.