Scimitar Building, also known as the Memphis Light, Gas, and Water Building, Winchester Building and most recently Hotel Napoleon, is a five-story stone-veneer structure in Memphis, Tennessee. Its architecture features a combination of Beaux-Arts and Romanesque Revival styles. It started life as the home of the Memphis newspaper Evening Scimitar and is currently a boutique hotel.

The Scimitar Building is a five-story stoned-veneer structure on a raised basement, designed in a combination of Beaux-Arts and Romanesque revival styles. The lobby is lined with original Tennessee marble, and is encircled by large circular, arched windows.

Originally the building had entrances on both Third and Madison streets. Lion heads decorate the top of the building along the fifth floor.

Although several alterations have been done in 1920s, 1950s, 1970s, and 2010s, the building overall retains a high degree of historical and architectural integrity. 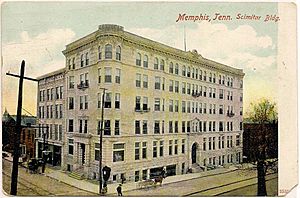 The Scimitar Building was commissioned by Napoleon Hill (1830–1909) in 1902 and designed by local architects August A. Chigazola (1869-1911) and William J. Hanker (1876–1958). Hill, known as Memphis' original "merchant prince", was one of the wealthiest people in Memphis, and a part owner of the Evening Scimitar. Hill lived across Madison Avenue in a mansion which stood on the site of the present Sterick Building. Hill's initials can still be seen etched into the façade of the building.

In 2016 the building re-opened as the Hotel Napoleon with 56 guest rooms, a business center, and fitness center. Named after original owner Napoleon Hill, the hotel is a member of Ascend Hotels, the boutique brand of parent company Choice Hotels.

All content from Kiddle encyclopedia articles (including the article images and facts) can be freely used under Attribution-ShareAlike license, unless stated otherwise. Cite this article:
Scimitar Building Facts for Kids. Kiddle Encyclopedia.