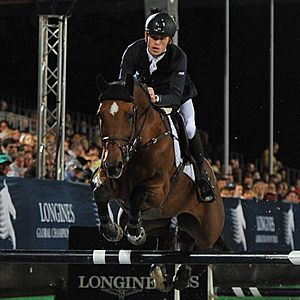 Scott Brash with Ursula XII in 2013

Scott Brash MBE (born 23 November 1985) is a Scottish showjumper. He began riding the horse Hello Sanctos in early 2012. They competed as part of the British Team at the 2012 Summer Olympics in London winning a gold medal in the team jumping event. In 2015 he became the first rider to win show jumping's Rolex Grand Slam, all three of the sport's most prestigious events in a single year, earning the sport's biggest individual prize of 1m Euros (£735,000).

Brash was born in Peebles, Scotland, and is the son of a builder. He attended Newlands Primary School and Peebles High School as a child, and at seven years old he began riding his own pony. At the age of ten he began show jumping in The Pony Club.

Brash won the World Cup Grand Prix in Florida in March 2012 during the run up to the 2012 Summer Olympics, winning the prize fund of $60,000. He placed ahead of Richard Spooner in second and Kent Farrington in third. In May he was part of the British team that finished sixth at the Rome Nations Cup in May 2012. He was named as part of Great Britain's show jumping team for the 2012 Olympics along with Nick Skelton, Ben Maher and Peter Charles.

At the London 2012 Summer Olympics, Brash and Hello Sanctos won a gold medal as part of the British show jumping team. They finished fifth in the individual competition.

Brash was appointed Member of the Order of the British Empire (MBE) in the 2013 New Year Honours for services to equestrianism. That year, Brash and Hello Sanctos won the team gold and individual bronze medal at the Herning European Show Jumping Championships. In November 2013, on the day of his 28th Birthday, Brash won the last event of the 2013 Global Champions Tour, the Doha Grand Prix, and secured himself the overall championship. In 2014, with Hello Sanctos, he won the Top 10 competition and the Rolex Grand Prix in Palexpo, Geneva.

In May 2015, Brash and Hello Sanctos won the Rolex Grand Prix titles in Aachen, Germany, Geneva Switzerland and Spruce Meadows, Calgary, Alberta, Canada, the sport's three most prestigious annual events. This made him the first rider to win the Rolex Grand Slam and show jumping's biggest individual prize of 1m Euros (£735,000).

Scott Brash won three legs of the Longines Global Champions Tour in 2015, including Miami Beach and Cascais (Estoril) with Hello Sanctos, and Monaco with Hello M'Lady. In 2017, Brash was disqualified from a Global Champions League event in Portugal after traces of blood were found on his horse Hello Forever. The controversial disqualification led to a push by some in the showjumping community to soften enforcement of the so-called 'blood rule.'

In 2018, Brash won the London Grand Prix of the Longines Global Champions Tour, seeing his total of LGCT Grands Prix victories reach eleven; the highest number held by any rider since the Tour was founded in 2006.

Brash remains close to the top of the Longines World Rankings as he has since his last Olympic appearance in 2012. Brash is currently the world number 9 rider.

Brash's top horse was Hello Sanctos. Together they won Team Gold at the London 2012 Olympic Games. They have had many other successes together including the Rolex Grand Slam, the Global Champions Tour in 2013 and 2014, several LGCT Grand Prix wins and many times through to the top 18.

The horses are owned by Lord and Lady Harris of Peckham and Lord and Lady Kirkham and are all a part of the very successful "Hello" stable.

All content from Kiddle encyclopedia articles (including the article images and facts) can be freely used under Attribution-ShareAlike license, unless stated otherwise. Cite this article:
Scott Brash Facts for Kids. Kiddle Encyclopedia.