In 1984, Eric and Carol Sartenaer, ex-Cheese Board Collective members, opened shop in a 450-square-foot “hole in the wall” bakery in Kensington, California. In January 1987, Barbara Frainier (one of their first employees) took over the business with her husband Michael Rose. In 1988, Tom Frainier (Barbara’s brother) joined the Semifreddi’s team. In order to save money, Tom, Barbara, and Michael, lived together in a small flat in Berkeley, California. Tom, who holds an MBA from Berkeley’s Haas School of Business, left an upper management position at Clorox to join his sister and brother in law, both UC Berkeley alumni, in the bread and pastry-making business. When asked about his exit strategy, Frainier replies, “death.” After Frainier took the helm as President, CEO, and self-proclaimed, “Chief Boot Licker,” Semifreddi’s rapidly expanded throughout the San Francisco Bay, while maintaining its emphasis on baking high-quality, European-style artisan bread and pastries. 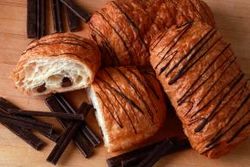 Semifreddi’s has become one of the largest artisan wholesale bread and pastry bakeries in the Bay Area. It is located in Alameda, California. Semifreddi’s and Acme are the two major players in the San Francisco Bay bread industry. In 2009, Semifreddi’s moved into a 33,000 square foot facility, where the bakery recycles 95 percent of its waste. It operates 24 hours a day, 7 days a week, for all 52 weeks of the year. The bakery utilizes over 25 different recipes and bakes more than 50 different artisan breads and pastries. In a typical week, Semifreddi’s bakes and delivers over 200,000 baguettes, rolls, and loaves and 40,000 pastries and cookies a week. Semifreddi’s sells to grocery stores, restaurants, and cafés throughout the bay area.

All content from Kiddle encyclopedia articles (including the article images and facts) can be freely used under Attribution-ShareAlike license, unless stated otherwise. Cite this article:
Semifreddi's Bakery Facts for Kids. Kiddle Encyclopedia.