Kids Encyclopedia Facts
This page is about Senecio garlandii. For other species with the common name 'Woolly ragwort', see Woolly ragwort.

Senecio garlandii is an erect, perennial shrub that grows to a height of 1.2 metres (3 ft 11 in). The stems and lower leaf surface are densely covered with white, cottony hairs, whilst the leaves grow to 15 cm long and 8 cm wide, with toothed edges. The leaves are stalkless, and clasp the stem. The numerous small flower heads are clustered in sprays, and mature into light brown fruits that are grooved and covered with slender white hairs.

The species occurs in dry schlerophyll forests and open woodlands, on the sheltered south and east facing slopes of rocky outcrops between Wyalong, NSW to Chiltern, Victoria. The species is capable of regenerating in both the absence and presence of fire, however fire facilitates germination and some resprouting occurs after fire. 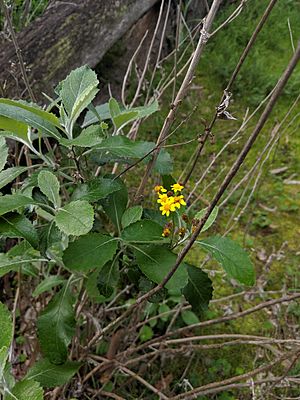 Woolly ragwort was previously listed under the EPBC Act as Vulnerable, but was removed in 2013 after it was reassessed by the Threatened Species Scientific Committee.

The species is listed as Vulnerable in NSW under the Biodiversity Conservation Act 2016.

The species is listed as Endangered in Victoria under the Flora and Fauna Guarantee Act 1988.

All content from Kiddle encyclopedia articles (including the article images and facts) can be freely used under Attribution-ShareAlike license, unless stated otherwise. Cite this article:
Senecio garlandii Facts for Kids. Kiddle Encyclopedia.