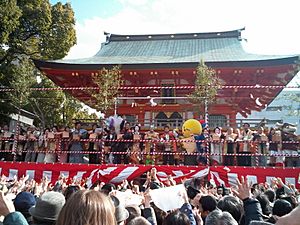 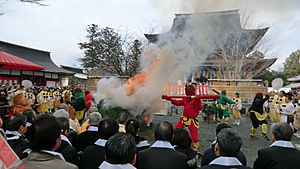 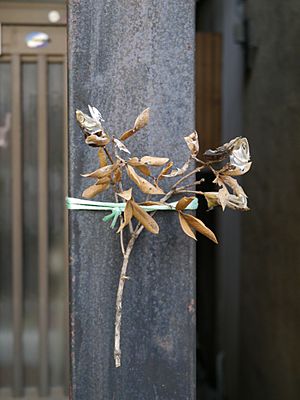 Setsubun is a traditional event in Japan and it celebrates the end of winter and the beginning of spring. It takes place on February 3 or 4 and there are a lot of ways to celebrate the day. People take part in a traditional mame-maki ceremony. People throw roasted soybeans (mame) and shout ‘‘Oni wa Soto Fuku wa Uti’’(Get out Ogre! Come in Happiness!). After the ceremony, each person eats the number of beans that is the same as their age in order to get happiness in the coming year. Another traditional custom is putting a head of a sardine and hiiragi on the door to get rid of Oni (ogre). In addition, people living in the Kansai area eat Nori Maki (a special sushi roll) while facing the ‘’lucky direction’’ and not saying a word .

Setsubun means “division of the seasons” in the literal sense. In ancient times the beginning of each season was called Setsubun. On the Setsubun day, various rituals were conducted to drive away devil’s sprits. Nowadays, however, Setsubun only refers to Risshun (beginning of spring) because the day is the most important than the other Setsubun day since the day is a new year’s day in lunar calendar.It is said that both of beans and rice have spiritual power in it, and to throw these things is a good way to drive demons from our own and our house. People used to throw rice in ancient time, but people started to throw beans instead of rice since Chinese folkway was introduced. Since then, people throw beans to drive demons on Setsubun day. As we said above, people usually eat an Ehomaki, which is a kind of makizushi, on Setsubun. Makizushi means “call over happiness”. We usually eat it without cutting because if we cut it, it implies “break up”. People usually put 7 kinds of ingredients in it after the Seven Gods of Fortune. We eat it without saying anything. Generally, it’s because it would be rudeness for the Seven Gods of Fortune if we are talking while we eat it, but anyone doesn’t know the fact.

"Setsubun" means separating seasons, and indicated each day before the first day of spring, summer, autumn and winter. However, the event "Setsubun" is very famous, so it became the word to indicate the day before the first day of spring only. Setsubun was a ceremony to drive of ancient China and gods who brought misfortune. Originally, it was the folk event to hope talisman and good crop of private sector. This ceremony came down to Japan in the Nara era. In the Hiean era, Tsuina that the event of New Year's Eve held in the palace, changed into the ceremony to drive demons. It died out in the Muromachi era, but the event gradually spread among commoner and remained as Mamemaki of Setsubun. In the evening of Setsubun, people set up branches of holly with sardine at the entrance of house, and scatter parched beans. However, nowadays households which adorn with them decreased, and only scatter parched beans. In the meantime, Ehomaki started as a custom to pray for te prosperous business at the harbor of Osaka in the end of Edo era. The custom died out temporarily, but Osaka Nori Kyodo Kumiai revived it in the event of Dotonbori in the late 1970's. Therefore, it was famous in the Kansai district. Also, it began to sell in the part of supermarkets and convenience stores in 1990's. In addition, it became rapidly popular among the whole country because Ehomaki was advertised considerably in stores.

There are a lot of events related to Setsubun in big shrines. For example, Narita-san Shinsho-ji in Chiba holds on big events every year. Some believers of Toshi-otoko (a man who was born in a year with the same sign of the Chinese Zodiac as the current year.) or big names are invited to the event and they perform mame-maki ceremony to gather people. Because of the bad economy in Japan, these events are crowed with a lot of people who try to call in happiness.

All content from Kiddle encyclopedia articles (including the article images and facts) can be freely used under Attribution-ShareAlike license, unless stated otherwise. Cite this article:
Setsubun Facts for Kids. Kiddle Encyclopedia.