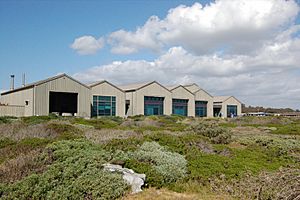 The University of California, Santa Cruz (UCSC) Coastal Science Campus consists of five main institutions: UCSC's Long Marine Laboratory, UCSC's Coastal Biology Building, the Southwest Fisheries Science Center, the Seymour Marine Discovery Center, and the Marine Wildlife Veterinary Care and Research Center. The physical location of the campus is at the western end of Santa Cruz, California, roughly 10 minutes away from UCSC's main campus, and is located adjacent to the Younger Lagoon Reserve. Walking trails exist throughout the campus and are used by area residents for walking, biking, and bird watching.

The development of an onshore marine laboratory was a priority for UC Santa Cruz's since its founding in 1965. In 1972, Mrs. Marion Stowell Younger and her late husband, Donald, donated 40 acres of land to be used as a marine laboratory and natural reserve. The 40-acre (160,000 m2) site contains a relatively undisturbed wetlands, the Younger Lagoon Reserve, and flat terraces for the marine lab buildings. The Long Marine Lab portion of the campus opened in late 1978 and formed the main research facilities supporting marine research of Santa Cruz faculty and students. The Marine Wildlife Veterinary Care and Research Center, owned by the California Department of Fish and Wildlife, was opened in 1997. The Seymour Marine Discovery Center, though informally present since the inception of the Long Marine Lab, was open in its permanent location on March 11, 2000. Groundbreaking for the Coastal Biology building and greenhouses took place in May 2015, with completion and occupancy occurring in September 2017. 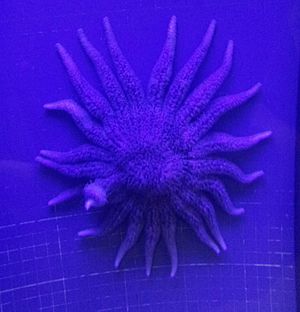 A Sunflower seastar on exhibit at the Discovery Center

The Blue Whale skeleton outside the Long Marine Laboratory of the University of California, Santa Cruz.

"Ms. Blue" is one of the largest blue whale skeletons displayed in the world and is one of four blue whale skeletons displayed in North America. The whale is 18 ft (5.5 m) tall and 87 ft (27 m) long, and was not fully grown when she washed ashore at Fiddlers Cove near Pescadero on September 6, 1979. Shortly after discovery, biologists and students from UC Santa Cruz began "flensing" (removing flesh and blubber) from the whale, with the whole process taking about a month to complete. Transported by helicopter and truck to the marine lab, the skeleton lay in a grassy field just downwind of lab buildings for over a year before being buried. Burying allowed nature’s decomposers to clean away the remaining tissue and oil that saturated the bones.

In the summer of 1985, the bones were unearthed and reconstruction began. Frank Perry, a local geologist and museum specialist, was hired to clean the bones and mount them for display. Working with lab staff and specialists from the Santa Barbara Museum of Natural History and the California Academy of Science, they constructed a steel framework to support the bones and recreate the proper arch of the spine, a job completed in 1986. In 1999, the skeleton underwent a relocation and refurbishment. During the original recovery process in 1979, some bones were lost to the tides, crushed under the 100-ton weight of the carcass, or stolen from the beach by souvenir hunters. Dr. Dave Casper, UC Santa Cruz veterinarian, re-created the 60 lost bones by creating molds from bones loaned by other institutions, or by using similar structures in the existing skeleton. The flipper bones, originally pinned close to the body, are now deployed away from the ribs in a swimming position. 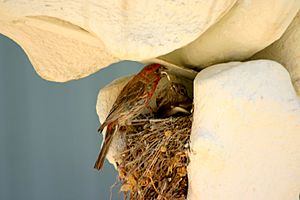 Due to the drought in Santa Cruz in the late 1970s the Soquel Creek Water District has agreed to split the bill with the city of Santa Cruz on a desalination plant. The city has not added to its water supply since that drought so the desalination plant would alleviate the threat of another drought. “Currently, work is being done to build a $4 million test desalination facility at the city's Long Marine Lab.”

All content from Kiddle encyclopedia articles (including the article images and facts) can be freely used under Attribution-ShareAlike license, unless stated otherwise. Cite this article:
UC Santa Cruz Coastal Science Campus Facts for Kids. Kiddle Encyclopedia.