The Shih Tzu is a breed of dog weighing 4–7.25 kilograms (8.8–16.0 lb) with long silky hair. The breed originated in China and is among the earliest breeds. Shih Tzu were officially recognized by the American Kennel Club in 1969.

The Shih Tzu is a sturdy little dog with a short muzzle and large dark eyes. They have a soft and long double coat. Although sometimes long, a Shih Tzu will not always have extremely lengthy hair like the pekingese (but with short legs). Some of them have more short, curly hair. This is purely a choice made by the owners. A Shih Tzu should stand no more than 26.7 cm at the withers and with an ideal weight of 4.5 to 7.3 kg. Floppy ears are covered with long fur, and the heavily furred tail is carried curled over the back. The coat may be of any color, though white and with blazes of grey are frequently seen. A very noticeable feature is the underbite, which is required in the breed standard.

The traditional long silky coat, which tends to reach the floor, requires daily brushing to avoid tangles. Because of their long coat and fast-growing hair, regular grooming is necessary, which may be expensive and should be taken into account when considering adopting one of this breed. Often, the coat is clipped short to simplify care, but the coat still requires daily brushing. For conformation showing, the coat must be left in its natural state, though trimming for neatness around the feet and anus is allowed. The shorter cut is typically called a "puppy cut" or a "teddy bear cut" when the puppy cut is accompanied by a fuller, rounder face, resembling a cute stuffed animal.

Although an individual Shih Tzus temperament varies from dog to dog, the breed has a personality and temperament that is loyal, affectionate, outgoing, cute, and alert. They tend to be possessive around other dogs. Training and proper socializing must start at a young age for the Shih Tzu to obey basic commands, for the Shih Tzu is prone to stubbornness when it comes to training. While the Shih Tzu is an excellent watchdog because of its alert and active nature, it was not specifically bred for this purpose. Unlike the Lhasa Apso, which was bred to be a sentinel dog that enjoys high perches and is wary of strangers, the Shih Tzu prefers to be close to its companions and will often offer strangers its affection. Because of its friendly nature, the Shih Tzu tends to interact well with other dogs and with children and adults. They do well with singles, couples, and families with older children. They may be a little temperamental with hyper or larger breeds, but generally, the Shih Tzu gets along well with other pets. They are generally well behaved and suitable for families. 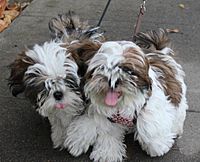 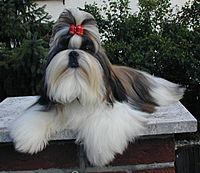 A Tricolor Shih Tzu with a black nose and grey ear tips.

A Shih Tzu pup. This is what they tend to look like around one to two.

The Shih Tzu comes in a range of colours that include various shades of gold, white, brown, and black. Other colours include black mask gold, black and white, solid black, solid liver, liver and white, brindle, white, red and white, and grey and white. Thus, when two Shih Tzu mate, there is a possibility that their offspring's coat will be similar to the sire's color, dam's color, tricolor, or a mix of both parents' color in one classification. An interesting point (and often a point of confusion) is that while the coat color of those with black pigmented skin (nose, lips, pads, also referred to as "leather") is determined by the color of the coat itself; the coat color on dogs with either liver or blue pigment is categorized by the color of the pigment. Thus, a parti colored (white and another shade) Shih Tzu with blue pigment is a "blue and white" regardless of the tint of the hair which might very well appear similar to a gold and white or other colors. The same principle applies to solid blue, silver, and silver and white. Sometimes you might see dark brown pigments near the shoulders and between the armpits. The coat color changes as the dog gets older.

The typical fine, straight, and silky Shih Tzu coat has also been listed by many popular dog information websites as being hypoallergenic. In comparison with many other breeds, Shih Tzu do not shed to the same degree, only losing small amounts when bathed or brushed. It is the dog's dander and saliva that trigger most allergic reactions. Allergists do recognize that, at times, a particular allergy patient will be able to tolerate a particular dog; but they agree that "the luck of the few with their pets cannot be stretched to fit all allergic people and entire breeds of dogs". The Shih Tzu coat is said to fall out only when brushed or broken, or just said to shed. The coat may also be wavy or coarse.

All content from Kiddle encyclopedia articles (including the article images and facts) can be freely used under Attribution-ShareAlike license, unless stated otherwise. Cite this article:
Shih Tzu Facts for Kids. Kiddle Encyclopedia.