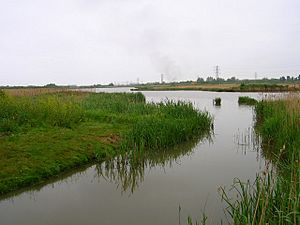 Shinewater Lake. This lake was built during the 1990s in tandem with he building of the new A22 route out of Eastbourne. An important discovery was a Bronze Age implement that had been preserved in the wet fen type countryside. The channel at the top links to the Willingdon and West Langney Sewer with the lake performing a floodwater storage function for the nearby suburb of Langney.

Shinewater is a part of Langney electoral ward in Eastbourne, East Sussex. In 1995 during the clearing of the Hydneye lake a Bronze Age settlement was discovered.

The remains of a Late Bronze Age platform were uncovered after work began digging the Hydneye lake as part of wider work to alleviate potential flooding. Initially in 1995 a 50m section of the platform was found. The following year a 60m section of trackway was found.

Additional finds included a bronze sickle with intact handle and three hearths set on clay, along with pottery belonging to the Late Bronze Age post Deverel-Rimbury tradition and large numbers of stone finds.

All content from Kiddle encyclopedia articles (including the article images and facts) can be freely used under Attribution-ShareAlike license, unless stated otherwise. Cite this article:
Shinewater Facts for Kids. Kiddle Encyclopedia.