Kids Encyclopedia Facts
Not to be confused with space ship.

The museum from the front 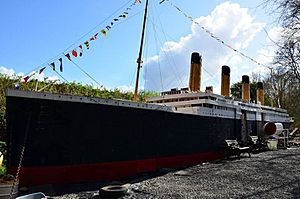 the 1:10 scale Titanic model is the centrepiece of the museum

ShipSpace was an interactive maritime museum in Inverness, Scotland. The museum was situated along the historic Caledonian Canal at the Muirtown Basin. The 1:10 scale Titanic model was one of the main attractions.

Inside the museum building there were various interactive exhibits, photos, posters and information about the ship available as well as a rolling film that showed divers going down to the sunken ship.

Outside, the 1:10 scale Titanic model was the centrepiece of the museum. The scale model contained three main rooms: a Parisian-styled café, a replica bridge, and a Marconi radio communications room.

Other exhibits outside included:

A replica of the Nautile submarine, one of the mini submersibles that dove 3 miles down to the Titanic

The Guiding Star, a West Coast creel fishing boat which was the last built at Inverness Thornbush slipway.

A full-scale replica of the Star Of Hope, the first Herring Drifter from Buckie.

The museum was located in the east building, which had been constructed in the mode of the original west building, a toll house. The two buildings were separated by a corridor.

All content from Kiddle encyclopedia articles (including the article images and facts) can be freely used under Attribution-ShareAlike license, unless stated otherwise. Cite this article:
Ship Space Facts for Kids. Kiddle Encyclopedia.