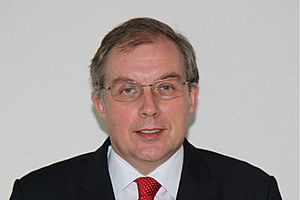 Simon Mark Featherstone CMG (24 July 1958 – 27 August 2014) was a British diplomat. He served as the High Commissioner to Malaysia from October 2010 until May 2014. He served the United Kingdom on diplomatic missions in China, Belgium, Switzerland, Liechtenstein and Malaysia.

Featherstone was born in London. He was one of four brothers. He studied law at the University of Oxford and got an MA in 1980. He was married and had three children.

All content from Kiddle encyclopedia articles (including the article images and facts) can be freely used under Attribution-ShareAlike license, unless stated otherwise. Cite this article:
Simon Featherstone Facts for Kids. Kiddle Encyclopedia.