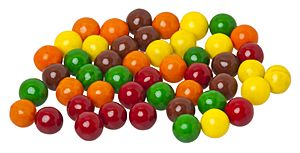 A cellophane package of Sixlets

Sixlets are small round candy-coated, chocolate-flavored candy made by Oak Leaf Confections, a Chocolat Frey company based in Toronto, Ontario, Canada. The chocolate-flavored centers are made from a mixture of cocoa and carob, giving them a "malted" taste. They are often sold in thin cellophane packages that hold them in a tube-like formation. The ball-shaped candies come in colors that include red, brown, yellow, green, blue and orange. An Easter variation of the candy adds white, pink, and blue pieces while removing red and brown ones from the mix. A Christmas variation has only red, green and white; and the Valentine's Day variation has red, pink, and white. Halloween versions are also sold, having only orange and black candies. At some specialty candy stores, Sixlets can be found sold loose by weight in individually sorted colors not found in the typical variety- lime green, black, pink, etc.- in the same way that M&M's are popularizing designer color selection. They are also packaged for sale as decoration for baked goods.

Sixlets have existed since at least 1960 and were originally made by Leaf Brands. A candy brand with a similar name that was also made by Leaf in the 1960s was called Fivesomes. Fivesomes were a miniature version of Whoppers that, like Sixlets, also came in cellophane wrapping. In 2003, Hershey Foods Corporation sub-licensed their rights to the Sixlets brand name to SweetWorks Confections LLC.

One hypothesis for the name's origin is that the candy, when originally manufactured, was sold six for a penny in a bubble gum-like machine. Although the candies are currently sold in a variety of packages, the most comparable to the original is an eight-ball cellophane pack sold in bags containing several servings. A six-ball tube was introduced in 2017.

All content from Kiddle encyclopedia articles (including the article images and facts) can be freely used under Attribution-ShareAlike license, unless stated otherwise. Cite this article:
Sixlets Facts for Kids. Kiddle Encyclopedia.