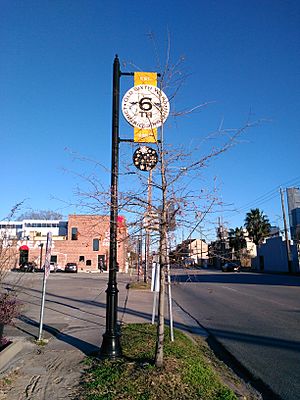 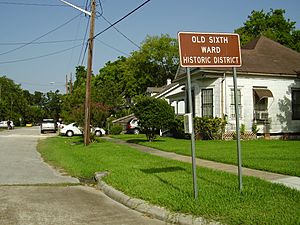 The Sixth Ward is a community in Houston, Texas, United States, one of the city's historic wards.

The area now called the Old Sixth Ward was originally part of a two-league Mexican land grant issued in 1824 to John Austin, a close friend of Stephen F. Austin. It had been assumed they were cousins but Stephen Austin’s last will and testament referred to John Austin as “my friend and old companion”. Two years after the Allen Brothers purchased the grant from Mr. Austin’s estate in 1836 to establish the city of Houston, Mr. S.P. Hollingsworth filed a survey of the western environs of downtown Houston which included today’s Old Sixth Ward which he divided into large, narrow tracts that ran northward from Buffalo Bayou. By January 1839, several tracts within the Hollingsworth survey had been sold to several prominent Houstonians, including W.R. Baker, James S. Holman, Archibald Wynns, Nathan Kempton and Henry Allen. By 1858, Mr. Baker and his colleagues owned or held mortgages on most of the land in this area. In that same year Mr. Baker engaged the County Surveyor, Mr. Samuel West, to restructure his holdings by replatting them into a lot and block system that defines today’s Old Sixth Ward. The new survey was laid out to the true north as opposed to downtown which was platted at a 45 degree angle to true north. The first sale after the re-platting took place on January 31, 1859, when Mr. Baker sold several blocks to Mr. W.W. Leeland. Construction of homes on the lots began in 1860 but a building boom did not take off until approximately ten years later when Washington Avenue was re-graded.

One area of the Sixth Ward was historically called "Chaneyville." The Sixth Ward also has the streets "Chaney Court" and "Chaney Lane." According to Ann Quin Wilson, a historian and a retired land researcher, the "Chaney" name likely originated from the area around the "Chaney Junction," the first railroad stop on the Houston to Washington-on-the-Brazos route of the Houston & Texas Central Railroad.

In 2008 the Old Sixth Ward neighborhood celebrated the sesquicentennial of its founding.

The Sixth Ward is home to the oldest intact neighborhood in Houston, known as the "Old Sixth Ward." Apart from Galveston, the Old Sixth Ward has the greatest concentration of Victorian homes in the region. As of 2007, 300 houses that had been built between 1854 and 1935 remained.

Old Sixth Ward lies on the western edge of downtown Houston, bounded by Memorial Drive to the south, Glenwood Cemetery to the west, Washington Avenue to the north, and Houston Avenue to the east.

Old Sixth Ward is recognized for its historic homes. It was listed on the National Register of Historic Places in 1978, making it the first neighborhood in Houston to be placed on the Register. The Houston City Council followed suit on June 25, 1998, designating Old Sixth Ward a Historic District.

Although Old Sixth Ward contains many homes from the late 19th century, Houston's lax preservation laws, allowing demolition of most historic properties after a 90-day wait, may eventually eliminate this historic area.

On August 1, 2007, the city of Houston approved an ordinance protecting the Old Sixth Ward and thereby prevented the demolition of over 200 buildings.

In 2007, the Houston Chronicle said, "While many old homes have been saved and renovated in the Old Sixth Ward just northwest of downtown, that area is an exception" to the general trend of city officials and city residents allowing the destruction of historic houses.

Before the development of the interstate system in the mid-20th century, there was an area at the eastern terminus of Washington Avenue named "Vinegar Hill." The writer Sigman Byrd, active from the late 1940s until the early 1960s, wrote about it, and the writings were published in Sig Byrd's Houston. Byrd, who frequently wrote for the previous Houston Press and later the Houston Chronicle, described it as "a kind of arrogant slum ... scowling down on a good portion of the proud new city itself." By 1994 Vinegar Hill had been demolished. 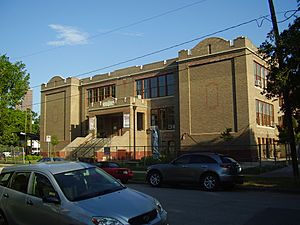 Dow Elementary School moved to its Old Sixth Ward location at 1900 Kane Street in 1912 and closed in 1991-1993. The afterschool program Multicultural Education and Counseling through the Arts (MECA) is located in the former Dow building. HISD began leasing the Dow building, which had been constructed in 1912, to MECA in 1993, charging MECA $1 per year for a 15 period frame. As part of the agreement, MECA began enacting renovations so the building can meet current life safety and accessibility codes. MECA received the title to the Dow building in 2004. The building also houses the Houston GLBT Community Center. Dow was named after Justin E. Dow. Dow was superintendent of Houston Public Schools from 1885 to 1887 and had served as the principal of Houston High School from 1882 to 1885.

Brock Elementary School served a portion of the Sixth Ward area until its closing in 2006 and repurposing as an early childhood center. Students zoned to Brock were rezoned to Crockett.

Harper Elementary and Junior High on Center Street was the primary school for Blacks in the area.

All content from Kiddle encyclopedia articles (including the article images and facts) can be freely used under Attribution-ShareAlike license, unless stated otherwise. Cite this article:
Sixth Ward, Houston Facts for Kids. Kiddle Encyclopedia.