Skittles are a type of sugar candy printed with the letter "S". They were created in 1974 by the Wrigley Company in England. 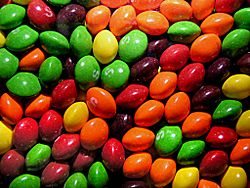 Skittles came to America in 1979. The Skittles' slogan "taste the rainbow" came from New York by a company called D'Arcy Masius Benton & Bowles.

Skittles is a type of chewy fruit-flavored candy. They have a hard outside with a chewy inside and an "s" on one side. Skittles come in many flavors. The original flavors were lime, lemon, grape, orange, and cherry.

All content from Kiddle encyclopedia articles (including the article images and facts) can be freely used under Attribution-ShareAlike license, unless stated otherwise. Cite this article:
Skittles Facts for Kids. Kiddle Encyclopedia.