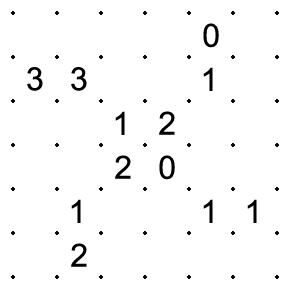 Slitherlink is played on a rectangular lattice of dots. Some of the squares formed by the dots have numbers inside them. The objective is to connect horizontally and vertically adjacent dots so that the lines form a simple loop with no loose ends. In addition, the number inside a square represents how many of its four sides are segments in the loop.

Other types of planar graphs can be used in lieu of the standard grid, with varying numbers of edges per vertex or vertices per polygon. These patterns include snowflake, Penrose, Laves and Altair tilings. These add complexity by varying the number of possible paths from an intersection, and/or the number of sides to each polygon; but similar rules apply to their solution.

Whenever the number of lines around a cell matches the number in the cell, the other potential lines must be eliminated. This is usually indicated by marking an X on lines known to be empty.

Another useful notation when solving Slitherlink is a ninety degree arc between two adjacent lines, to indicate that exactly one of the two must be filled. A related notation is a double arc between adjacent lines, indicating that both or neither of the two must be filled. These notations are not necessary to the solution, but can be helpful in deriving it.

Arc notation around a 2 in a corner.

Many of the methods below can be broken down into two simpler steps by use of arc notation.

Exactly 2 or 0 lines at each point

Application of this simple rule leads to increasingly complex deductions. Recognition of these simple patterns will help greatly in solving Slitherlink puzzles.

Rules for squares with 1 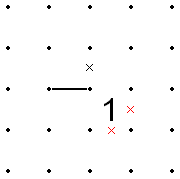 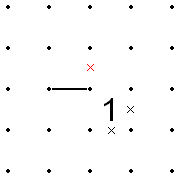 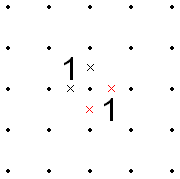 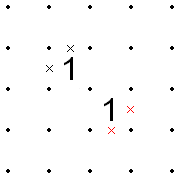 A rule for squares with 2

If a 2 has any surrounding line X’d, then a line coming into either of the two corners not adjacent to the X’d out line cannot immediately exit at right angles away from the 2, as then two lines around the 2 would be impossible, and can therefore be X’d. This means that the incoming line must continue on one side of the 2 or the other. This in turn means that the second line of the 2 must be on the only remaining free side, adjacent to the originally X’d line, so that can be filled in.
Conversely, if a 2 has a line on one side, and an adjacent X’d out line, then the second line must be in one of the two remaining sides, and exit from the opposite corner (in either direction). If either of those two exits is X’d out, then it must take the other route.

Rules for squares with 3 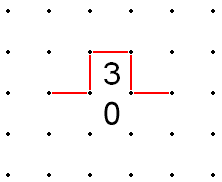 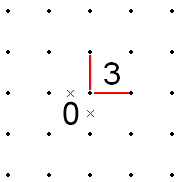 Diagonals of 3s and 2s 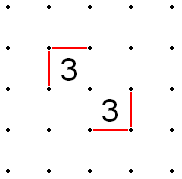 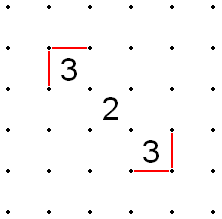 Diagonal 3s with 2 between them. 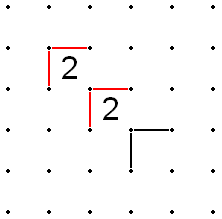 One or more diagonal 2s terminated by two filled lines pointing into them. 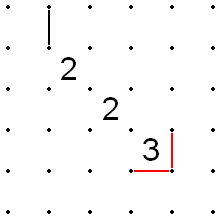 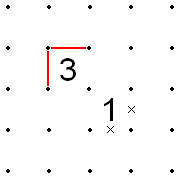 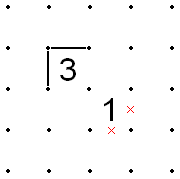 Diagonals of a 3 and 1 opposite

Diagonals starting with a 2 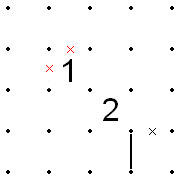 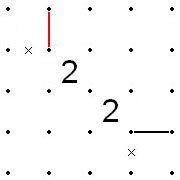 A rule for closed regions

If a region of the lattice is closed-off (such that no lines can "escape"), and is not empty, there must be a non-zero, even number of lines entering the region that begin outside the region. (An odd number of lines entering implies an odd number of segment ends inside the region, which makes it impossible for all the segment ends to connect. If there are no such lines, the lines inside the region cannot connect with the lines outside, making a solution impossible.) Often, this rule will eliminate one or more otherwise feasible options.

In the figure below, the line at the top-left will close off the top-right region of the lattice whether it proceeds down or to the right. The line to the right (around two sides of the 3) has entered the closed region. To satisfy the rule, the first line must enter the region, and the second line must not enter the region a second time. (Since the boundary of any closed region also closes off the remainder of the puzzle, the rule can also be applied to the larger, bottom-left region. To apply the rule, it is only necessary to count the lines crossing the boundary.) 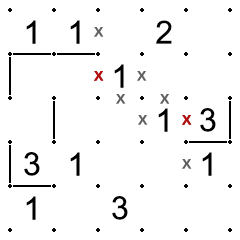 A simple strategy to assist in using this theorem is to "paint" (sometimes called "shade") the outside and the inside areas. When you see two outside cells, or two inside cells next to each other, then you know that there is not a line between them. The converse is also true: if you know there is no line between two cells, then those cells must be the same "color" (both inside or both outside). Similarly, if an outside cell and an inside cell are adjacent, you know there must be a filled line between them; and again the converse is true.

Rules for puzzles that have only 1 solution 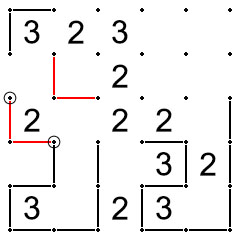 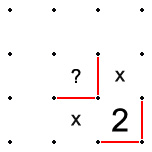 In the figure below, the circled points can be connected by a line directly between them, and also by a line that traverses the other three sides of the square that extends to the left of the points. It should be clear (with the red line ignored) that for both paths the remainder of the solution can be the same – since the constraints for the remainder of the solution are the same – so both paths are ruled out. 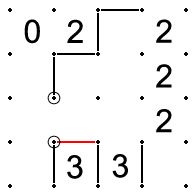 All content from Kiddle encyclopedia articles (including the article images and facts) can be freely used under Attribution-ShareAlike license, unless stated otherwise. Cite this article:
Slitherlink Facts for Kids. Kiddle Encyclopedia.