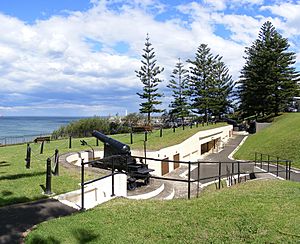 Built between 1891-1893 to provide a deterrent to a possible Russian attack upon Wollongong Harbour.

The fort is a concealed battery on high ground above Wollongong Harbour with underground rooms for supplies, ammunition and shelter with emplacements for two 80-pound cannons on iron carriages, and a 1 1/2 inch quick firing gun.

It was used extensively for company training and maintained by the Wollongong-Bulli Half Company.

In 1946, the fort was filled with rubble and dirt. The fort was dug out and restored in 1988 and two cannons were restored and reinstalled at the fort.

All content from Kiddle encyclopedia articles (including the article images and facts) can be freely used under Attribution-ShareAlike license, unless stated otherwise. Cite this article:
Smiths Hill Fort Facts for Kids. Kiddle Encyclopedia.