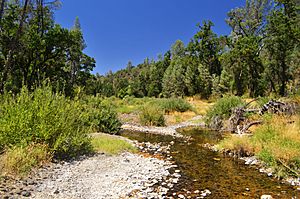 Butts Creek flows through the center of Snell Valley; As seen in July 2016

Snell Valley was part of Rancho Guenoc when it was deeded as part of a Mexican land grant in 1845. It is assumed that the valley is named after George and Hiram Snell, two brothers from Germany, who were documented as residents of the Guenoc Rancho in 1857.

All content from Kiddle encyclopedia articles (including the article images and facts) can be freely used under Attribution-ShareAlike license, unless stated otherwise. Cite this article:
Snell Valley Facts for Kids. Kiddle Encyclopedia.