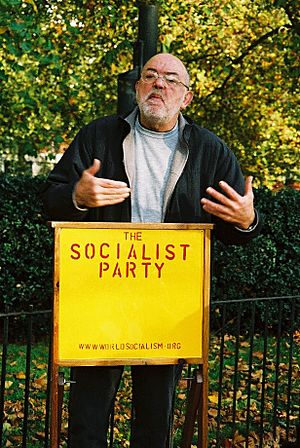 A soapbox is a temporary platform used to give a speech. During the 19th century, soap was transported in wooden boxes. When a person had new or unusual ideas, and wanted to talk to a crowd about them, sometimes he or she would stand on an empty soapbox so that everyone could see and hear the talk well.

People sometimes use the word "soapbox" to mean a place to say new or unusual things.

All content from Kiddle encyclopedia articles (including the article images and facts) can be freely used under Attribution-ShareAlike license, unless stated otherwise. Cite this article:
Soapbox Facts for Kids. Kiddle Encyclopedia.