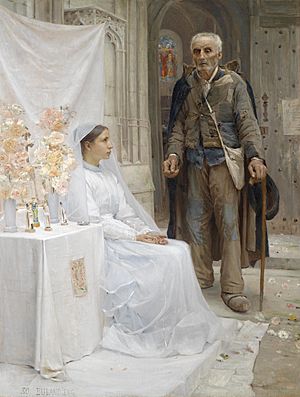 Socioeconomic status (SES) is an economic and sociological combined total measure of a person's work experience and of an individual's or family's economic and social position in relation to others. When analyzing a family's SES, the household income, earners' education, and occupation are examined, as well as combined income, whereas for an individual's SES only their own attributes are assessed. However, SES is more commonly used to depict an economic difference in society as a whole.

Socioeconomic status is typically broken into three levels (high, middle, and low) to describe the three places a family or an individual may fall into. When placing a family or individual into one of these categories, any or all of the three variables (income, education, and occupation) can be assessed.

Additionally, low income and education have been shown to be strong predictors of a range of physical and mental health problems, including respiratory viruses, arthritis, coronary disease, and schizophrenia. These problems may be due to environmental conditions in their workplace, or, in the case of disabilities or mental illnesses, may be the entire cause of that person's social predicament to begin with.

Education in higher socioeconomic families is typically stressed as much more important, both within the household as well as the local community. In poorer areas, where food, shelter and safety are priority, education can take a backseat.

All content from Kiddle encyclopedia articles (including the article images and facts) can be freely used under Attribution-ShareAlike license, unless stated otherwise. Cite this article:
Socioeconomic status Facts for Kids. Kiddle Encyclopedia.