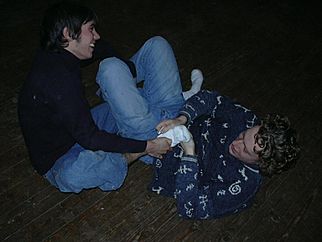 Sock wrestling is a game that can be played by children, teenagers and young adults, with at least two people, and consists of taking one or both of your opponent's sock off their foot to win.

There can be an unlimited number of players, who may or may not be organized into cooperating teams.

Sock wrestling is often mentioned as a good choice for recreational activity for primary education teachers or physical education classes.

It is recommended that the players are above eight years old.

The two players must be sitting down or on their knees on the ground before the match starts, without footwear and wearing two socks. It is better to play on top of gym mats or a carpeted room. When the referee gives a signal to start (such as shouting "go" after a countdown of three, etc.), the match starts. It is recommended to use old socks, since there is the risk of them being damaged and torn during the game. Excessive force is not allowed.

The players then must struggle to reach the opponent's feet and remove their socks, and be careful to not have their socks removed. The first one to take one or both socks off or the one with most socks (in case of multiple players) wins.

All content from Kiddle encyclopedia articles (including the article images and facts) can be freely used under Attribution-ShareAlike license, unless stated otherwise. Cite this article:
Sock wrestling Facts for Kids. Kiddle Encyclopedia.