Solidago bicolor, with several common names including white goldenrod, silverrod and (in Québec) verge d’or bicolore, is a plant species native to much of eastern North America. It is found in Canada (from Manitoba to Nova Scotia) and in the United States (every state completely east of the Mississippi except Florida). It prefers sandy and rocky soils, and can frequently be found along roadsides. 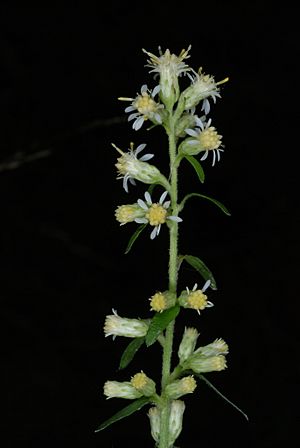 Solidago bicolor is distinctive in the genus. Stems are thin and wiry. Flowers are white rather than yellow, the heads mostly clustered in the axils of the leaves rather than displayed in a large terminal raceme.

All content from Kiddle encyclopedia articles (including the article images and facts) can be freely used under Attribution-ShareAlike license, unless stated otherwise. Cite this article:
Solidago bicolor Facts for Kids. Kiddle Encyclopedia.