Kids Encyclopedia Facts
Not to be confused with Salmagundi or Solomon Gundy. 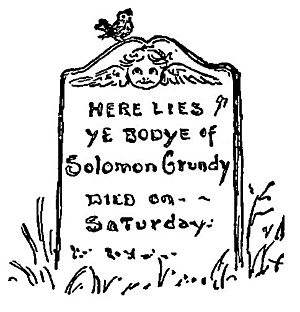 "Solomon Grundy" is an English nursery rhyme. It has a Roud Folk Song Index number of 19299.

The rhyme has varied very little since it was first collected by James Orchard Halliwell and published in 1842 with the lyrics:

Solomon Grundy,
Born on a Monday,
Christened on Tuesday,
Married on Wednesday,
Took ill on Thursday,
Grew worse on Friday,
Died on Saturday,
Buried on Sunday,
That was the end,
Of Solomon Grundy.

All content from Kiddle encyclopedia articles (including the article images and facts) can be freely used under Attribution-ShareAlike license, unless stated otherwise. Cite this article:
Solomon Grundy (nursery rhyme) Facts for Kids. Kiddle Encyclopedia.