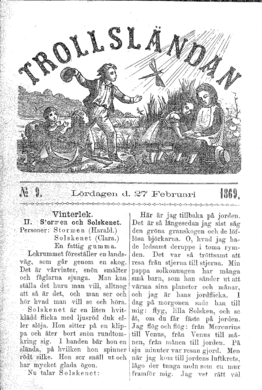 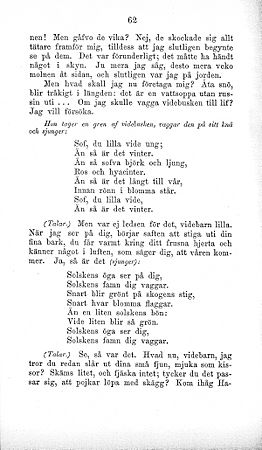 A page from Topelius's book Läsning för barn ("Reading for children") No. 4, 1871. The text differs slightly from the version published earlier in 1869.

Sov du lilla vide ung (English: "Sleep, you little willow young"), otherwise known as Videvisan ("Willow song") or Solskenets visan ("Sunshine's song") is a poem by the author Zachris Topelius which was first published in the ninth issue of the children's magazine Trollsländan ("Dragonfly") on February 27, 1869.

Topelius is considered to be the first author of Swedish-language literature specifically intended for children. From the 1840s till his death he wrote some 230 poems, songs, stories and fairy tales. He was also the first in Scandinavia to write plays for children. He appeared widely, including in Trollsländan, with columns under the heading Vinterlek ("Winter play"). He intended the pieces he wrote to become a part of children's play, not to be used as theatrical performances.

Sov du lilla vide ung was part of just such a small children's play entitled Stormen och Solskenet ("The storm and the sunshine"). The introduction describes the main role of the "Sunshine" character:

Sunshine is a small white-clad girl with pink cloth or veil. She sits on a rock and eats away at the snow all around her. In her hand she carries a spindle, onto which she spins red silk. She seems kind, and her eyes are filled with delight.

The most famous musical setting for the poem is by the Swedish composer Alice Tegnér (1864–1943).

Stormen och Solskenet has three roles, all intended to be played by children. The game begins with set design guidelines: "The playroom represents a country road going through a forest. It is early spring; the snow is melting, and birds are singing." A bit further into the text Sunshine says: "Could I bring the willow bush to life? I want to try." She takes a branch of willow bush, rocks it on her knee and sings:

Sunshine continues: "When I gaze at you, the sap begins to rise out into your fine bark, you get warm around your frozen heart, and feel something in the air, which tells you the spring is coming. Yes, so is it (sings:)

In 1871 Topelius's fourth issue of Läsning för barn ("Reading for children") appeared. Stormen och Solskenet was published once more but with some minor changes to the lyrics. 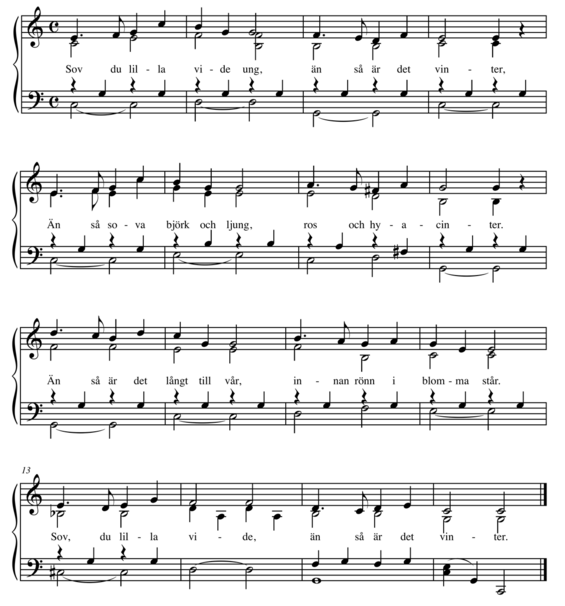 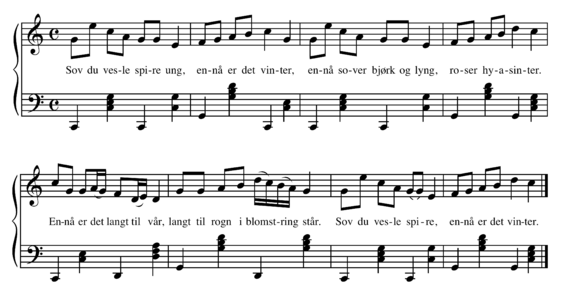 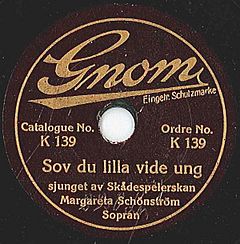 Label for a 1925 Swedish recording of Sov du lilla vide ung, sung by Margareta Schönström. "Gnom" was a German-produced record label designed to play on toy gramophones for children; the platters were only 15 cm in diameter (i.e., smaller than a 45-rpm gramophone record.

An early recording of the Tegnér version was made by Inga Berentz in Stockholm in 1909. In May 1925 Polyphon recorded the song's performance by soprano Margareta Schönström; it was published on the company's 78-rpm Gnom brand with the catalogue number K 139. Maria Llerena has also sung it in Spanish as Duerme mi Nenita on her 1988 album Chiquitico mio. In addition, there are over 100 recordings listed in the Swedish media database.

All content from Kiddle encyclopedia articles (including the article images and facts) can be freely used under Attribution-ShareAlike license, unless stated otherwise. Cite this article:
Sov du lilla vide ung Facts for Kids. Kiddle Encyclopedia.