Oligosoma infrapunctatum, the speckled skink, is a species of skink in the family Scincidae. It is endemic to New Zealand.

The speckled skink is classified under the New Zealand Threat Classification System as being in 'gradual decline'. However, evidence indicates that this classification refers to a complex of closely related species, and the actual O. infrapunctatum may be highly endangered or even extinct.

Oligosoma infrapunctatum is a widespread but patchily distributed skink with a distribution spanning the North Island from the Bay of Plenty south, and the South Island in the Marlborough Sounds, Nelson and Westland regions. It occurs in open forest, scrubland and tussock grassland from sea level to the subalpine zone, on boulder beaches in the Westland region of the South Island and occasionally in farmland and other modified habitats. 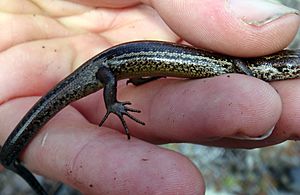 All content from Kiddle encyclopedia articles (including the article images and facts) can be freely used under Attribution-ShareAlike license, unless stated otherwise. Cite this article:
Speckled skink Facts for Kids. Kiddle Encyclopedia.